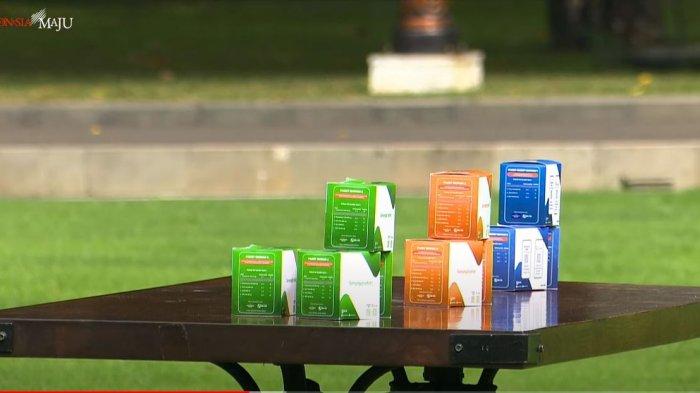 President Joko Widodo has moved quickly in dealing with the Covid-19 pandemic, one of which is by providing free medicine packages to the public. With this policy, Covid-19 patients are expected to recover quickly.

The confirmed number of Covid-19 has increased quite dramatically, the Government has launched 300 thousand packages of Covid-19 therapy drugs for free for the people of Java and Bali. Erick Thohir as Minister of State-Owned Enterprises (BUMN) ensured that the gift was not limited to Java and Bali.

This t-package package is not for sale. Erick said that the distribution of drugs was prioritized for people who could not afford it.

There are three types of drug packages for the needs for 7 days. The first package with a blue box is for OTG patients ( asymptomatic people). The second pack is green for people with fever and loss of smell. While the third orange package was given to residents with symptoms of fever and dry cough.

Erick Thohir wants people who are undergoing self-isolation to recover from COVID-19. He will also oversee the preparation of drugs and vitamins for these packages.

President Jokowi also explained that at the beginning the government would distribute 300 thousand drug packages, then next week the next 300 thousand will be continued. Former Jakarta governor of the berhara p order groceries and medicines given dap at easing the burden on society. So that people can be calmer in the midst of the Covid-19 Pandemic.

President Jokowi also launched a drug package for COVID-19 patients who are undergoing self-isolation in the Java-Bali region. The drug is intended for OTG. In addition, the government also distributed social assistance in the form of basic necessities and cash to the community. Distribution to ease the burden on the community in the midst of the Emergency PPKM policy.

Meanwhile, President Jokowi has also ordered the TNI to distribute medicine packages to communities in Java and Bali, including ensuring that the medicines reach the people in need.

Marshal Hadi Tjahjanto as Commander of the Indonesian Armed Forces (TNI) ensured that he would carry out the mandate given by President Joko Widodo regarding the distribution of drug and vitamin assistance for people undergoing self-isolation (isoman) in the Java and Bali regions.

The former Air Force Chief of Staff said Babinsa would be at the forefront. Babin sa will support officers from the puskesmas and village midwives. To ensure that the distribution of isoman drugs goes well without any irregularities, the TNI will coordinate with puskesmas officers, local governments, health services and police.

Isoman drug assistance will be given to people who have met the applicable requirements from the puskesmas. Later the puskesmas and village midwives will carry out triage, namely dividing self-isolated patients into a number of categories, between OTG and patients with mild symptoms. Thus, the distribution of drugs will be adjusted according to these data.

Hadi said that the condition that must be met to get the drug package was proof of a positive PCR test result. Another requirement is that residents undergo self-isolation. If they meet these requirements, residents or families are asked to contact the village midwife or the nearest puskesmas officer.

This program certainly deserves support and it is hoped that more people will be helped because it is affected by PPKM, as well as increase immunity for people who are undergoing independent isolation.