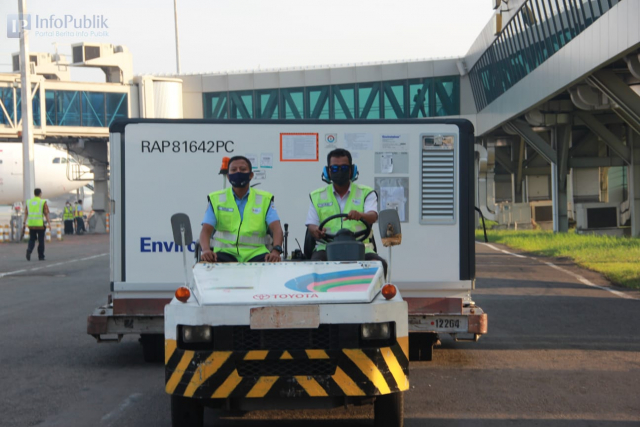 The national vaccination must be 100% successful and if possible, it will be completed faster than the target. Therefore, the distribution of vaccines must be carefully considered. Indonesia consists of many islands and delivery of vaccines to Sabang to Merauke will take time. All parties collaborate so that vaccines can arrive, even to remote areas.

Since early 2021, the government has implemented a national vaccination and is targeting completion in 12 months. The target is set because the sooner this program is completed, the sooner we will survive the stifling pandemic. In addition to increasing the stock of vaccines, distribution is one of the important things in the success of national vaccination.

Distribution is an important factor in national vaccination because Indonesia consists of 34 provinces and some are located far from Jakarta, such as Merauke. So that if vaccine distribution runs smoothly, even in the most remote areas, vaccine stocks will be safe. People will get the covid vaccine and get their rights in the health sector.

Chairman of the House of Representatives Puan Maharani stated that there were no problems in distributing vaccines in Indonesia. The House of Representatives has encouraged the government in equal distribution of vaccinations. In a sense, vaccinations have been distributed to various regions in Indonesia, from Sabang to Merauke. So, it is a big mistake when someone says that vaccination is only for Indonesian citizens in Java, because it has also been held in Borneo and other islands.

The topography of the Indonesian territory which consists of a group of islands is indeed one of the challenges in the success of national vaccination. Distance is not an obstacle for distributing vaccinations, because the TNI is loyal in guarding the vaccines as well as helping their distribution. This is their commitment in helping to make the national vaccination program a success.

Why the TNI? The reason is because they are not only tasked with maintaining state security, but are also committed to assisting all government programs, including vaccinations. In addition, the TNI can distribute it under tight control, so that the vaccine will not be stolen by irresponsible people.

Puan Maharani added that more vaccines would enter Indonesia, from September to December. Vaccines must be distributed to the public immediately, because they have an expiration date. So, when the vaccine is in storage in Jakarta, it must be immediately distributed to other areas on the island of Java and other islands.

The increase in vaccine stock is indeed being intensified, because there is an increase in the target from the initial 1 million injections per day to 2 million injections. Therefore, vaccine supplies must be safe and do not run out. In a sense, supplies will have to be secured and the government will continue to increase their stock, both in the form of vaccines and bulk (raw materials).

Vaccine supplies are very important because before being distributed, the stock must be ensured to be safe. The reason is because the population in Indonesia is more than 200 million people and requires 2 injections, so at least more than 400 million ampoules of vaccine are needed. To secure stock, the government buys vaccines from Sinovac, Moderna, Pfizer, and AstraZaneca.

After ensuring the stock is safe, the vaccine will be flown to various regions in Indonesia, from Sabang to Merauke. In addition to vaccine supplies, storage and injection are the next focus. The reason is because each vaccine is stored at a different temperature, so once it arrives, the vaccine must be stored carefully.

Vaccine distribution is one of the government’s focuses, so that all Indonesian citizens get their right to corona vaccination. Officials also assist in the distribution of vaccines, as well as to secure them. When the vaccine is distributed, all levels of society can get the injection and will have good immunity.

Condemn The KST Papua’s Terror Action ahead of PON XX