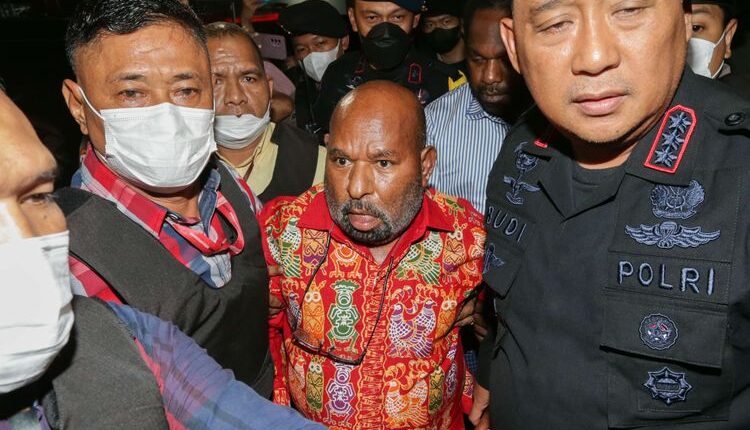 Jakarta — KPK arrested Lukas Enembe on January 10, 2022. The arrest went smoothly despite resistance from a number of pro-Luke elements. Communities, especially Papuans, are asked to respect Lukas Enembe’s legal process. He was proven guilty and committed corruption and gratuity, so he cannot be defended and protected for any reason.

Since September 2022, Lukas Enembe has been named a suspect in the corruption and gratuity case by the KPK. He was summoned to undergo an examination at the KPK’s Red and White Building but never came to him. Lukas always argued that he had a heart attack and a severe stroke, so it was dangerous to travel long distances between islands.

However, Lukas could no longer dodge the excuse of a stroke because the KPK team, working with security forces, arrested him at a restaurant in the Abepura area, Papua. This incident occurred on January 10, 2022. Lukas Enembe’s attorney, Stefan us R Rening stated that at the time of his arrest, he was not with Lukas. At that time, Lukas was eating papeda fish sauce and was caught by the KPK.

Meanwhile, KPK chairman Firli Bahuri stated that the arrests were made after there was news that Lukas Enembe was planning to flee abroad on January 10, 2022. Then he coordinated with Inspector General Mathius D Fahiri, the Papua Regional Police Chief. After that an arrest was made and Lukas could no longer dodge the excuse of a stroke, because it was proven that he could eat at a restaurant.

After being arrested, Lukas was detained at the Headquarters of Mobile Brigade Kotaraja, Papua. After being secured there was a group of people who attacked the Mobile Brigade Headquarters and threw stones at them. Inspector General Mathius D Fahiri, Papua Police Chief, stated that 2 people were arrested in this incident, and only a few hours later the situation was conducive.

The public is asked to support the arrest of Lukas Enembe because he has been proven guilty of corruption and received gratuities. The proof is that there are hundreds of billions of rupiah in his account and it is very unlikely for a governor whose salary does not reach Rp. 20 million to have that much money.

The KPK has also conducted searches of Lukas’ houses and found a number of gold bars. From the statements of many witnesses, they also confirmed the corruption and gratuities committed by Lukas Enembe. When there is evidence and witnesses, don’t protect Luke on the grounds of illness or humanity, because he has been proven to have made a fatal mistake.

The community was also asked not to hinder the work of the KPK and security forces in the arrest of Lukas Enembe. It is regrettable for those who threw stones at the Mobile Brigade Command Headquarters, because they were defending the guilty. Don’t protect the suspect because it’s the same as breaking the law in Indonesia.

If a person is arrested during the stone-throwing incident, playing the victim is strictly prohibited . The public may not vandalize the Mobile Brigade Command Headquarters or the offices of other security forces for any reason. Moreover , Mobile Brigade is doing its job to help the KPK arrest Lukas Enembe and enforce the law in Indonesia.

Moreover, the masses who came to the Mobile Brigade Headquarters clearly put other people in danger, so it was only natural that they would also be arrested. He should have supported the KPK and the security forces in arresting Lukas Enembe who is a suspect. Instead of asking for freedom.

The law exists to provide justice in Indonesia and it is natural for a suspect to be arrested and awaiting time to be jailed. The public is asked to support law enforcement against Lukas Enembe. Don’t take the law into your own hands because it’s the same as breaking the law, by asking a suspect not to be put in a correctional institution.

Mass riots also occurred when Lukas Enembe was about to take a flight to Jakarta, at Sentani International Airport. The situation was even more chaotic than what happened at the Mobile Brigade Command Headquarters, because the masses came carrying sharp weapons. It was as if they wanted to go to war with the security forces.

In order to secure the situation, the apparatus was forced to carry out stern warnings and measured decisive efforts. This is permissible because the threat is life. The situation finally calmed down when the plane carrying Lukas Enembe had flown.

The public is asked to remain calm and not be provoked by hoaxes circulating that the Papuan people are being held tightly by the security forces. Even though the truth is that they were disciplined and forced to do so in a harsh way. The reason is because if you don’t use this method , Lukas Enembe’s departure could fail, because they demand the governor be released.

Lukas Enembe has arrived in Jakarta and underwent examination at a hospital, before being examined by the KPK. When Lukas was arrested, there was a riot which caused his supporters to go crazy. The public was asked not to support the rioters. However, they are expected to continue to fully support the KPK in processing the Lukas Enembe case, so that it can be completed quickly.