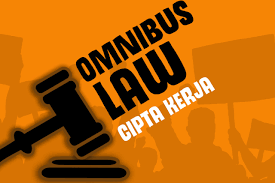 The community supports the issuance of the Law on Job Creation and Handling of various labor problems that the Government has been trying to achieve. With this regulation, it is hoped that it can increase investment and move the people’s economy, which was previously heavily affected by the Covid-19 pandemic.

Have you read the points in the Job Creation Act? This law has been very popular since it was launched at the end of last year, because this is the first time that a law has been made to deal with various stars. Starting from the economy, investment, the impact of handling labor problems. So there are those who dub the Job Creation Act as the sweeping law of the universe.

Since the work creation law was passed, all Indonesian people have agreed to it. They support this law because there is a positive change in the bureaucracy in Indonesia. In addition, employment issues are also handled properly by the Job Creation Law, so that every employee has the right to be properly paid.

The Chairman of the Indonesian Ombudsman, Mohammad Najih, stated that the Job Creation Law is expected to be able to accelerate licensing in the investment sector and increase the ranking of ease of doing business in Indonesia. In a sense, after this law is passed, there will be many entrepreneurs who will appear because business licensing is made easier. This will help the country as it reduces the unemployment rate.

In addition, the Job Creation Act is also very friendly to foreign investors. If there is cooperation with investors, new factories will be built and on average are labor-intensive industries. This can also reduce unemployment in Indonesia and be a solution, when many people are laid off during the pandemic but can apply to the factory.

Therefore, the Job Creation Law must be supported because it is a powerful drug to reduce unemployment in Indonesia. When everyone already has a job, the level of the economy will rise and people’s purchasing power will also increase. So that the wheels of the economy roll smoothly. This positive domino effect is expected by the government.

The Executive Director of The Indonesian Institute, Center for Public Policy Research (TII) Adinda T Muchtar stated that the Job Creation Law has positive potential to encourage the free development of economic development in Indonesia. Including ease of doing business and investment. Business opportunities will be wide open if freedom of business is expanded.

If the Indonesian economy improves, the workers will also benefit. They can work smoothly because they are not afraid of the threat of layoffs, because the factory or office runs stably. Improved economic conditions will improve the situation at work.

Adinda added that the Job Creation Act will create a flexible labor market in Indonesia. Rigid, fat, and corruption-prone regulations will hinder people from working. In a sense, this law does have a positive impact on workers because they can work without being hit by strict regulations. If there is a job creation law, the work will run smoothly because the rules tend to be more flexible.

When there is a job creation law, it can eliminate the possibility of corruption, collusion and nepotism. The reason is because the licensing is done online so there is no dirty interference from the elements. Civil servants can work well without being pressured by black bureaucracy, and will not be confused because they have to be dragged along. In a sense, he can work ideally without being hostile for rejecting KKN.