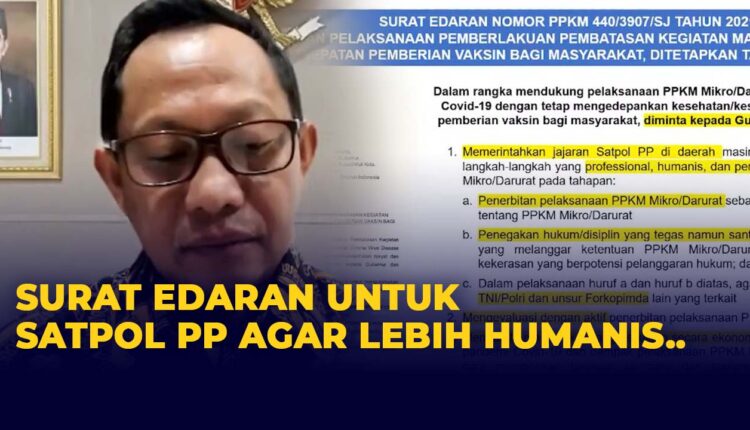 The implementation of Emergency Community Activity Restrictions (PPKM) is an effort by the Government to suppress the surge in new cases of Covid-19. The public is asked to comply with these policies and law enforcers are expected to use a humanist approach in enforcing these rules.

When the emergency PPKM was implemented, the mobility of the citizens was really restricted. Many ended up being blocked and they felt that the officers on guard were too strict in their duties. In fact, the officers took a humanistic approach and the public was made aware of heart-to-heart communication.

PPKM emergency was declared until 20 J uly 2021. This program currently practiced, then it is so important points are restrictions mo Bilitas residents. There are many barriers, from the inside to the city/district borders. Even the provincial borders and roads leading to toll roads are also closely guarded by the authorities.

The people spontaneously screamed because they wanted to go, but it was as if they had to struggle with the officers near the partition. Many residents are finally confused because they have to work outside the home because they don’t get work from home facilities like employees in other offices.

The Task Force explained that there was no misunderstanding. J uru Talk Covid-19 Task Force Aceh Saifullah Abdul Gani stated that the municipal police and ilayatul Hidbah, assisted by troops and police to act sympathetic, educational, and inspiring to the people who passed by.

Abdul Gani added that there is no such thing as an officer at the division who does not act humanely, so it is as if during PPKM the atmosphere is like the Aceh conflict. However, what happened was that when there was a raid or isolation, the officers checked the completeness of the community.

For example, if you are traveling out of town, have you brought the test results (rapid or swab) and a work certificate from the company? Then, if they use a car, the maximum number of passengers is 50% and all must wear masks. If possible, all passengers plus the driver also show a vaccination card.

Abdul Gani added that the partition was also prevented from allowing residents from outside Aceh to enter the rencong land. Even if it’s for really important matters, you must show a certificate, swab test results, and have your body temperature checked with a thermal gun . The goal is to prevent the alpha, beta, and delta variants of corona from entering NAD.

The humanist approach is indeed carried out during the pandemic, especially during emergency PPKM. The reason is because when there is a partition, the officers on duty should not be considered arrogant and spark hostility. Even though they are only carrying out their duties to limit people’s mobility and reduce the number of corona patients.

It is in this situation that officers, both Satpol PP and other officers, must take a humanistic approach. Indeed, restrictions must be strictly enforced, but lest civilians be harmed. The reason is because they should protect the community, not scare the community.

Indeed, discipline needs to be applied during the emergency PPKM period, especially when the number of covid patients is increasing, but with a humanist approach, it will feel more harmonious. Do not let people suffer during PPKM because it is difficult to pass, even though they are working to earn a bite of rice. So sometimes it must be done flexibly and should not be too strict .

When there is a humanist approach, there is a win-win solution . The apparatus continues to carry out their duties and the public can pass, but with strict conditions. The reason is because not everyone can work from home, so they have to work hard on the streets so that the rice pot doesn’t topple over. The staff also understands that everyone needs to eat.

The humanist approach during the pandemic shows that the officers guarding the partition are not arrogant figures, but are carrying out their duties as well as possible. Don’t let partition become a new drama that harms civilians. The reason is because the emergency PPKM itself is implemented for the safety of the community, not to harm them.