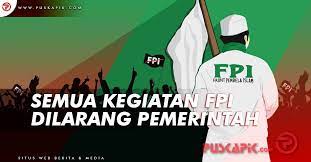 The Indonesian Broadcasting Commission (KPI) issued a ban on prohibited mass organizations from appearing on television and radio. This decision was deemed appropriate so that the situation in the month of Ramadan remains conducive and the public can worship in peace.

Da’wah in the media, both television and radio, will certainly be more common during Ramadan. Of course, this momentum should not be used by preachers who are involved in banned mass organizations to get a stage either on TV or radio to spread ideas that might conflict with Pancasila.

The ban was conveyed by the Indonesian Broadcasting Commission (KPI), which prohibits broadcasting institutions, both television and radio, from showing preachers from banned organizations. The regulation has been stated in KPI Circular Letter Number 2 of 2021 concerning broadcasting during the month of Ramadan.

In point 6 letter d written in the circular, KPI emphasizes that preachers who will appear on TV or radio must comply with the standards of the Indonesian Ulema Council (MUI). In addition, KPI emphasized that the invited preachers must uphold Pancasila.

In SE KPI Number 2 of 2021, it is written that the media should prioritize the use of competent, credible preachers or preachers who are not related to the prohibited organizations as stated in the law in Indonesia, and in accordance with MUI standards, and in delivering the material always leads to the values ​​of Pancasila.

Irsal said that this rule was made to prevent polemics. KPI wants da’wah events in the month of Ramadan to educate the public, not cause controversy.

Irsal also explained that the month of Ramadhan in Indonesia would not be polemic, so that the KPI drafted such a regulation.

He said that KPI would cooperate with MUI to monitor broadcasting institutions during Ramadan. In fact, they will give sanctions if the da’wah event invites preachers from banned organizations.

We cannot deny that intolerant preaching is not a mere figment. The rise of lectures on social media that call for violence, hatred and anti-Pancasila is clear evidence of this intolerance.

Ironically, many people still watch such lectures, even turn them into a guide. If they get the chance to appear in media such as TV and radio, then how dangerous the effects will be.

At least, there are several reasons why intolerant preachers are dangerous if they appear on TV. First, they are anti-Pancasila and NKRI. Where they often call for anti-Pancasila in every sermon.

Dai who is involved in banned mass organizations often thinks that Pancasila and NKRI are not in accordance with religious law, and even accuses NKRI of being a thagut state . In fact, Pancasila and NKRI are the result of a consensus that has been mutually agreed upon by our founding fathers. If the preachers involved in the forbidden mass organizations appear on TV, of course their actions can threaten the existence of the Republic of Indonesia.

The provision of a preacher is certainly not only religious knowledge, but also must be accompanied by a strong national and Indonesian insight, namely his commitment to Pancasila and the Republic of Indonesia.

The essence of da’wah is to invite goodness, not to invite anti-Pancasila calls, so that the preachers or da’i who are related to prohibited organizations get the opportunity to appear on TV, so that they freely spread their intolerance.

Furthermore, KPI also anticipates that there will be da’wah that can spread hatred, which is usually conveyed by insulting and insulting other religions or groups. Da’wah which contains hate speech can actually cause hatred towards fellow children of the nation and divide the unity and integrity of the Republic of Indonesia.

Therefore, it is not supposed to preach that invites violence to get a stage in this country, especially appearing in the mainstream media such as TV and radio. Because Da’wah by force is not a solution to solving problems and problems. Because, in fact, violence is the main root of every problem.

Concretely, we should encourage the government to prohibit preachers involved in banned mass organizations from appearing on TV. KPI’s step in issuing an SE regarding the prohibition of preaching from this banned organization is the right step, so that TV and Radio are filled with cool and reconciling preaching.