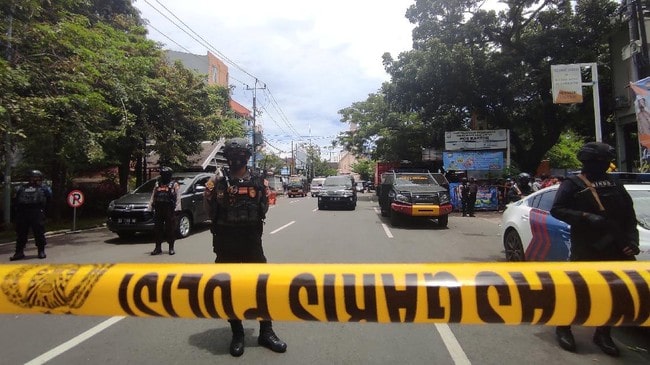 The community supported the security forces to continue pursuing the terrorist network that detonated the bomb at the Makassar Cathedral Church. These efforts are expected to reveal the intellectual actors behind the bomb explosion as well as create a sense of security in the community in worship.

The Indonesian people were intensified by the news of a suicide bombing that occurred at Greja Katredal Makassar on March 28, 2021. Jokowi raised his voice, saying that the suicide bombing had nothing to do with any religion.

A suicide bombing incident is an act of terrorism that cannot be ignored. Many community responses were surprising, including some who disagreed with the government about it being unrelated to religion.

But officially, Jokowi, as the president of Indonesia, said that terrorism is not related to religion.

“Terrorism is a crime against humanity and has nothing to do with any religion. All religious teachings reject terrorism for whatever reason,” said the president on the podium.

The connection with the suicide bombing or terrorism that took place right in front of the Cathedral on Sunday, is of course a crime that is not taught in any religion. The public is advised not to be influenced by terror, which can be perpetrated by ordinary people.

There are many allegations related to this incident, as expressed by Ken Setiawan as an observer of terrorism at the NII Crisis Center. He revealed that terrorism can occur anywhere as long as the public and government pay less attention to former organizations.

“Those who have radicalized their thoughts, then don’t fit into the group, leave. But it is not accepted by the public, and the government does not pay attention to it, so acts of terror like this are very likely to occur “

This was revealed in a direct interview on Kompas TV by Ken Setiawan. This expression makes perfect sense, if it is seen, of course, it is not related to the teachings of religions in the world.

Apart from Ken’s observations, the police have tried their best to determine who the perpetrator was in the case of the suicide bombing that occurred in the Cathedral.

Strong evidence points to the couple (husband and wife) who had planned this bombing. The identity of the fingerprints and other evidence that was found along with the evidence of the burning motorcycle, is indeed very surprising.

The two of them just got married about six months ago, and chose to live alone by contracting somewhere. Reportedly, the one who married off was a member of a terrorist group who had previously acted, but now has died named Rizaldi.

The couple, who is a man, has the initials L, as alleged by the police. In several interviews with residents living near Mrs. L’s house, she said L was a quiet person and still wanted to hang out with residents.

But that immediately changed, after he secretly followed a certain group and then did not continue his studies.

“In the past, people were quiet, and they still wanted to get together with the residents. He lectures nearby, but his lecture, then suddenly wants to quit. In fact, at that time, he was still in college, he changed drastically, often came home at night, and could not be told, “said Hamka as the head of RW 1.

He also explained that L could not accept that his mother participated in religious activities such as barzanji. His mother received a warning from L, and said that the activity was only bid’ah.

The discovery of the facts above is still in line with Ken’s statement. About a group that takes the name of religion, but what is in it is not in accordance with the values ​​of goodness, but a mere thought.

But it is not easy to be separated from the shackles of certain groups, be it because they have been influenced like what happened with L. Until a drastic change haunts L, and makes him desperate to the point of a suicide bombing.

Incidents like this keep repeating itself, and we cannot find the right solution, because other possibilities can also occur. To be sure, all people and the government must come together to find a solution and not allow it.

A case that disguises itself as religion and considers suicide to be the best way of jihad, is seriously wrong. Because of this kind of murder, it has never been taught by religion, but the fact is that it teaches that there is a certain person or group that has a mission.

The same thing can happen around other communities, as a society, we must remain vigilant. In order not to fall into or not be affected, what is certain, religion only teaches goodness is not a murder.