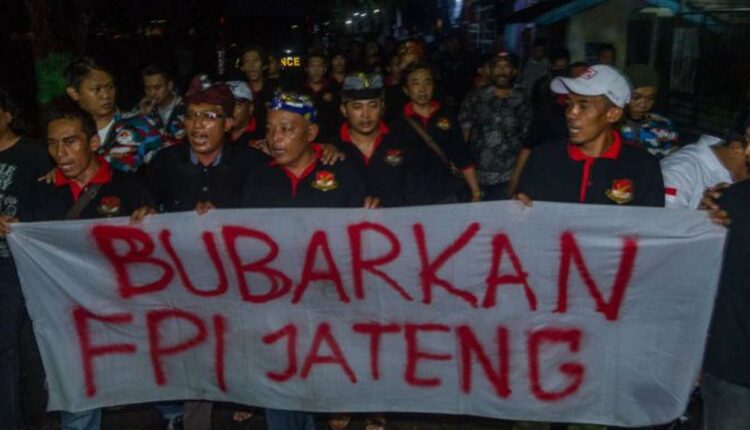 Terrorism-Affiliated FPI Deserves to be Disbanded

By: Muhammad Zaki) *
A number of terrorist suspects who were caught admit to being members of a terrorist network, AND they are also members of the FPI. This fact shows that FPI is truly affiliated with terrorists. So that their dissolution does not need to be debated, because it is included in the prohibited category of mass organizations.
Terrorism is a heinous act, because terrorists can do anything, including bombing. The goal is that their wish is granted. Terrorist acts are subject to harsh penalties, even when someone protects a suspect who turns out to be a separatist and terrorist network, he will also be punished.
The mass organization known to be affiliated with terrorists is FPI. Zainal Anshory alias Abu Fahry admitted that his organization was once the FPI wing in Lamongan Regency, in 2005. The organization in question is one of the mass organizations that turned out to be terrorists. So that proves the allegation that FPI has been affiliated with terrorists.
Abu Fahry and his friends were betrayed directly by Sheikh Abubakar Al Baghdady. So that they feel blessed and more confident to take various actions, to create a caliphate system. Even though Indonesia is a Pancasila country and cannot accept this concept. But they impose their will and act like terrorism.
Abu Fahry stated that his organization had taken the same actions as the central FPI, namely sweeping in the community. Unfortunately, this sweeping was not authorized, because they are not security forces. So that people are even more confused by their actions who act arbitrarily, on the grounds of defending the truth.
If the reason is to eradicate crime, why do they have the heart to commit violence among the people? For example, raiding food stalls during Ramadan. Even though it could be that the owner of the place is not fasting and the consumer is also not obliged to fast. Sweeping like this is what disturbs the public, because they feel scared.
When Abu Fahry admitted to being a member of a terrorist, it was only natural to receive a punishment accordingly. Because it could be that he and his minions did things that exceeded the limit. Apart from sweeping, terrorists usually carry out raids just before the holidays of people with other beliefs. So they injure pluralism in Indonesia.
Terrorists also have the heart to throw bombs into public places, for various reasons that don’t make sense. They also attacked the security forces, and even considered the current government illegitimate. Naturally, if terrorists are eradicated until they are 100% destroyed. Because it destroys peace and scares the Indonesian people.
Former FPI member Munarman denied that he was close to Abu Fahry, but the public did not believe his words. The reason, he had lied too often. Moreover, the public linked Abu Fahry’s confession with Rizieq Shihab’s speech. At that time he expressed his support for ISIS, which in fact a terrorist organization.
Then, there are other clues that further suggest that FPI is affiliated with terrorists. The evidence is a photo of a firearm claimed to belong to the FPI laskar. Whereas for ordinary people, it is impossible to have it. So it is certain that the gun was found on the black market. What’s a gun for? It is increasingly suspicious that the FPI has a certain mode.
If FPI is proven to be a terrorist organization, then it is natural that the government will disband it. The reason is because they are radical and could carry out acts of separatism. Because they do not agree with the basis of the Pancasila state and the 1945 Constitution. Someone who is not a nationalist like Rizeq Shihab and FPI members must be made aware that they live in Indonesia, not in a caliphate state.
The public is increasingly antipathy to FPI because there are many facts that prove that they are a terrorist organization. One of the members of the FPI organization’s wing was proven to be a terrorist. In addition, there was the discovery of illegal firearms belonging to FPI members. terrorism must be eradicated at its roots. The goal is to create peace in Indonesia.

Beware of Hoax Vaccination on Medsos