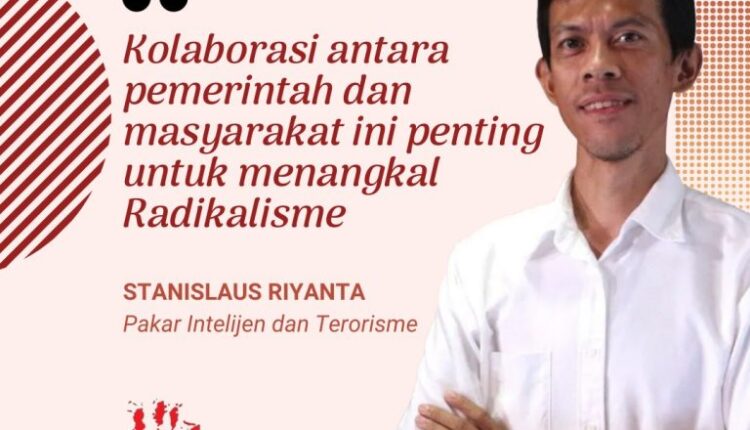 Terrorism Expert: Collaboration between BNPT, Ministry of Trade, and Ministry of Education and Culture Able to Prevent Radicalism

“This collaboration between the government and the community is important,” said Stanislaus in a live dialogue on Radio Republik Indonesia (RRI) Pro 3, Monday (20 June 2022).

According to him, BNPT as the main stakeholder must make a guide first. This guide contains a collaborative model for terrorism prevention. After the guidelines are made, they can later be applied by each stakeholder.

“What does the Ministry of Religion do, what does the community do, how is the collaboration, this must be a model. So if there is already a model, then there is a mutual agreement. For example, the joint movement to eradicate terrorism can only be moved together. But if it is not agreed what terrorism is, it is still a debate, it will be difficult for collaboration to emerge,” he said.

Stanislaus reminded that radicalization must be fought with society. “Because radicalization occurs in society, the community’s greatest strength is to fight it,” he explained.

He added that currently what needs to be done to prevent radicalism is to prepare people to fortify themselves so that they can recognize the ideology of Pancasila. If the public already understands the nation’s ideology is Pancasila, then it will not be influenced by ideologies outside of Pancasila.

In addition, the Ministry of Communications and Information Technology must conduct a screening of radical content. “The function of the Kominfo”
“We have to do a screening so that there is an algorithm so that when there is content that leads to radical ideas, it can be blocked and not reach the public,” he said.

Stanislaus continued, the government must embrace big mass organizations such as Nahdlatul Ulama and Muhammadiyah. Both were invited to work together and strengthened again to come down to the community.

“So that people can be more embraced. Examples such as khilafatul muslimin. The leader is arrested, this is true. Then what kind of people are exposed to it? because they are victims of propaganda. When the leader was arrested, the government invited NU and Muhammadiyah to embrace the people who were victims. It will be shown that this is the right one so that people will not be confused,” said Stanislaus.

Synergize Against the Covid-19 Pandemic By Obeying Prokes