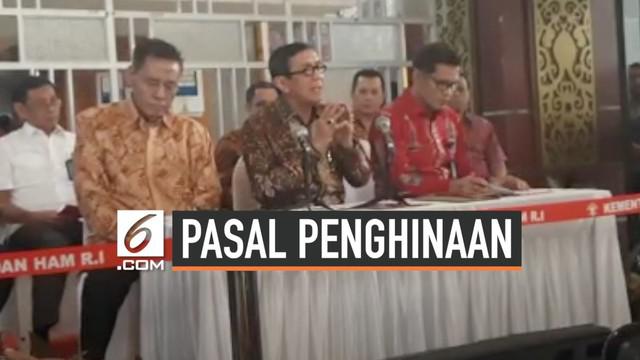 The article on insulting the President will be included in the RKUHP which is immediately approved by the public , because it is a form of support for President Jokowi as Head of State . So if someone openly insults by making an anecdote, they will be caught in the article and be threatened with imprisonment.

President Jokowi is the president most loved by the people, the proof is that he was re-elected as RI-1 in the 2019 presidential election and his electability is high. People think that the current president has acted fairly and is able to solve various problems that exist in Indonesia. So they are satisfied with his leadership.

Therefore, when there is an article on insulting the president to be included in the RKUHP, the public immediately agrees to it. Because the president is a symbol of the state and certainly should not be vilified, for any reason. However, a president must be respected by all his people and should not be made a joke.

While in article 219 the point is “everyone who broadcasts, shows pictures, recordings, etc. which contains attacks on honor against the president and vice president will be threatened with a sentence of 4 years and 6 months”. In a sense, the image includes memes, jokes, edited anecdotes, etc.

Why should there be articles to regulate insulting the president? The reason is because since the reformation era, there has been a euphoria about freedom of expression. Because in the past, during the New Order era, democracy was suppressed and people were not allowed to speak at all. They were afraid that they would be banned, even at worst, that Peter would arrest them, during the protest.

In the end, however, this freedom of expression was immediately over-the-top. Especially in the internet era, social media is also booming so that people can voice their hearts quickly and instantly go viral. Unfortunately freedom is abused by attacking those who are less favored, including the president.

Their cynicism is expressed by making photo edits, memes, hoaxes, etc. The memes that have been circulating so far have gone too far, because the president’s photo was edited in such a way that his dignity was disturbed. So that there is a need for a strict article, to regulate the actions of individuals who have gone too far.

The chairman of the DPP Community Organization DPP Projo Budi Ari Setiaji supports the article on insulting the president, because the current law is not sufficient to anticipate actions that could insult the president. Because RI-1 must be maintained its dignity. In a sense, the law he is referring to is the ITE Law.

Other communities also agree with this article, because after all, a leader of a country should not be insulted just like that. A president must be upheld and respected, because of his position as RI-1. How can anyone who doesn’t like the president and then insults him casually? Of course he should get the punishment he deserves.

The article on insulting the president is not a way to suppress democracy, but a way to control so that netizens are not blind. Because there are people who have gone too far, by making memes and hoaxes to vilify the head of state. Their actions deserve to be punished and reminded in a very harsh way.