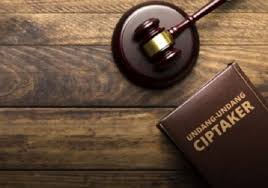 The Job Creation Act is the legal umbrella for almost all fields, from investment, economics, employment, to mining. This law was made to tidy up various regulations in Indonesia so they don’t overlap. So that there is no confusion in the community, which rules to follow.

The designation for the Job Creation Law is the Sweep Universe Law because it has dozens of clusters, ranging from MSMEs to employment. This law was controversial because there were many changes that occurred after it was enacted. However, this change is of course in a positive context, not a negative one as some have suspected.

In fact, the Job Creation Law was made to regulate various regulations so that they no longer overlap. Why are there laws and other regulations that are not linear? It could be because of different presidents, different regulations. Therefore, President Jokowi is trying to straighten out, so that the regulations are uniform, both from top to bottom, so that there is no confusion in the community.

There are indeed many clusters in the Job Creation Law, ranging from the MSME cluster, to employment, to forestry. This rule is deliberately made so that there are changes in these fields. So that the regulations are clear, and will be implemented to small communities, not only on paper.

If the regulations are clear, it will reduce confusion in the community. For example when they want to take care of licensing. It won’t be ping-pong to and fro like it used to be. But only look at risk-based permissions. In a sense, if it is an MSME entrepreneur, the risk is considered low and does not pollute the environment.

That way, MSME entrepreneurs who want to take care of legality, don’t need an HO permit. Because this permit the cost is quite high. But it is enough to take care of the business license number. Taking care of it can also be done online, so it’s practical, you don’t need to leave the house and make a crowd. This kind of management also avoids the risk of being hit by a palak alias corruption by unscrupulous service employees.

The permit will be issued in about 5 working days and can be used as proof that the business is valid. If you already have a business registration number, it will be easier to apply for credit to state-owned and private banks, so it will enlarge the business of MSME actors. Because they have additional capital.

A positive domino effect will occur and this is what the government hopes for. With clear regulations, the business will also be clear, and can improve the state’s financial condition. Because the majority of traders in Indonesia are MSMEs, they must be assisted.

Apindo Director Agung Pambudhi hopes that the Job Creation Law can improve investment in Indonesia. So there is uniformity of rules from top to bottom. Permit applications can be granted within a certain time limit. In a sense, legality will not be ‘hanged’ by the service.

This investment is expected to improve the business world in Indonesia. Because in the past the rules were still chaotic, but now they have been completely overhauled. Regulations are improved and will make foreign investors want to enter Indonesia, even though it is still a pandemic. Because our country is considered a potential place to invest.

In addition, clear regulations will make foreign investors want to enter because there is no such thing as greetings to official employees in managing business legality. They certainly do not want to pay like that, because it is considered illegal. The rules that apply must apply, not just slogans.

The Job Creation Law makes regulations in Indonesia streamlined, so that it will benefit all people. Entrepreneurs will get business licenses easily, quickly, and free of charge. They will also get help from foreign investors, because they enter Indonesia after a regulatory overhaul in the right direction.