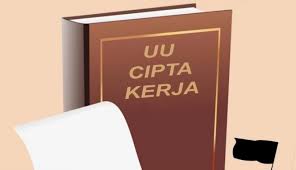 After the Job Creation Law was passed, some people demonstrated to oppose it. They say that the government does not want to listen to the aspirations of the people. In fact, it is wrong, because before this law was passed, the government had met with representatives of the people several times. The presence of this meeting shows that the Government has actually heard public aspirations regarding the Job Creation Law.

The Omnibus law of the Job Creation Law is a new breakthrough from President Jokowi, because it regulates various sectors, ranging from labor, agriculture, to investment. The old regulations were drastically changed and the bureaucracy was cut. However, despite the good intentions, the Job Creation Law is in fact still being protested by several groups.

Those who disagree about this law argue that the omnibus law is not pro-people. Even though they did not read the original and very thick text of the Act, they were only consumed by hoaxes. The government has also held meetings many times before this law was passed. So it is not true if there is an allegation that the manuscript of the Job Creation Law is speeded up like a round tofu fried suddenly.

Before the Job Creation Law was passed, Minister Mahfud MD also invited labor representatives to meet with him. The goal is that they can convey their aspirations related to the law. If there is a meeting with the minister, the workers can provide input, which parts of the draft law are not approved.

At other times, representatives from the labor unions have also audited the DPR baleg. They issued complaints about clusters in the Job Creation Law, and the people’s representatives learned about the workers’ anxiety. Their input was very good so that the Law would not only be pro on one side, but benefit many people.

But unfortunately after the meeting, the workers seemed to forget and held a demonstration against the Job Creation Law. Even though demonstrations during the corona season certainly endanger their lives and violate health protocols. When they were kicked out by the authorities, they got emotional and thought the government was arrogant.

Even though this prohibition is for their health and the environment. Instead of demonstrating against the Job Creation Law, can’t you convey your aspirations well? For example, there are representatives from labor unions who meet with officials or the President, and submit their protests.

If there is such a meeting, then the misunderstanding will be cleared up. They understand why there is an employment cluster in the omnibus law, because the goal is to revise the labor law and make it even better. So it is not to confuse the workers and benefit investors and entrepreneurs.

When the demonstrators fail to meet the President, because he has another schedule, don’t get emotional. After all, he can still convey his aspirations through his social media, whose comments column is open. It could be that President Jokowi is the only RI-1 leader who reads input from his people via Instagram.

The President also immediately explained about the Job Creation Law, after 3 consecutive days of demonstrations, last October. Currently, there are many hoaxes about the omnibus law, and the President explained it in detail. So people should not be emotional, because the news on social media and electronic newspapers can be confusing.

Even the President also allowed the people to contest the Job Creation Law in the Constitutional Court. Permission to submit a judicial review to the highest court is very rare in Indonesia, and shows that the government is not arrogant. However, they want to listen to the aspirations of the people and allow them to take legal steps.

When the government has opened the door to aspirations for the people, then use it well. Convey protests politely, because if emotions will be less clear the meaning. We must face it with a cold head, not with a hot heart. Don’t even dare to demonstrate against the omnibus law of the Job Creation Law, because you are at risk of contracting the corona.