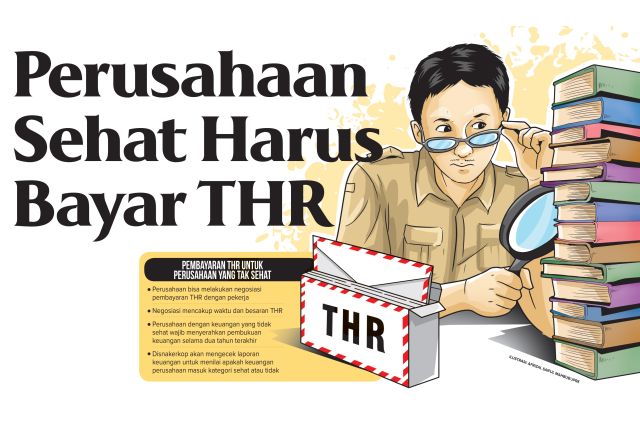 The Government of the Concrete Encourages Companies to Pay THR

The government continues to encourage companies to pay holiday allowances (THR) on time. The reason is, the Government has provided many incentives for the business world, so that the payment of THR on schedule is expected to maintain the resilience of the people’s economy .

THR (Tunjangan Hari Raya) is the right for every employee who works at a company in Indonesia, including employees whose work relationship is based on a certain time work agreement (PWKT) or contract employees.

Chairman of DPD RI AA La Nyalla Mahmud Mattalitti asked companies in East Java not to pay THR in installments. He asked the company to be honest if it was unable to pay the THR so that the East Java Manpower and Transmigration Office would discuss it openly with workers.

The state of the Covid-19 pandemic has certainly hit companies hard. However, companies must remain transparent to their employees

He also emphasized that THR must be paid in the last week of Ramadan or one week before holidays.

Meanwhile, the central government also encourages private companies to pay holiday allowances (THR) to their employees. This was conveyed by the Coordinating Minister for Economic Affairs Airlangga Hartarto

He said that the company had to pay THR because the government had facilitated sales tax on luxury goods (PPnBM) for the company. In addition, there was also an increase in vehicle sales by 143 percent in March.

Not only that, according to him, the VAT borne by the government during the pandemic caused an increase in sales by low-income people by 10%, middle 20% and high 10%.

Airlangga said that THR distribution was an important strategy to increase household consumption. As is known, consumption is one of the driving forces for economic growth, which was negative throughout 2020.

The government certainly has its own reasons why THR should be paid on time by companies to employees. Airlangga said a number of incentives for business convenience had been provided as a pandemic stimulus since last year. According to him, this should help the company’s finances and the ability to pay the THR.

On a different occasion, Minister of Manpower Ida Fauziah during an online press conference said that the THR 2021 disbursement schedule for private workers is no later than 7 days before religious holidays.

The regulations for giving THR for workers and laborers are contained in a circular letter Number M / 6 / HK.04 / IV / 2021.

The following are the provisions for the amount of THR in 2021:

THR should be given to all workers who have worked for 1 month continuously or more. Religious THR is also given to workers / laborers who have a working relationship with employers based on an unspecified work agreement or a fixed-time work agreement.

The amount of THR also depends on the period of work, for example for workers who have a continuous work period of 12 months or more, THR is given as much as 1 month of wages.

Meanwhile, for workers / laborers who have worked for 1 month continuously, but less than 12 months, THR is given proportionally according to the calculation of the working period divided by 12 months.

Then, for workers / laborers who work based on a daily work agreement that has worked for 12 months or more, 1 month’s wages are calculated based on the average wages received during the last 12 months prior to religious holidays.

If they are unable to provide THR to employees, employers will be subject to fines and sanctions in accordance with applicable regulations. The amount of the fine is 5% of the total THR to be paid.

The form of sanctions can be in the form of warning, writing, limiting business activities, to temporary suspension of part or all of the means of production.

THR is a form of employer responsibility towards employee rights, so the provision of this allowance is of course mandatory considering that the economic situation is getting better.

) * The author is a contributor Rim and the Student Press Cikini

Government Optimizes Use and Supervision of Special Autonomy Funds