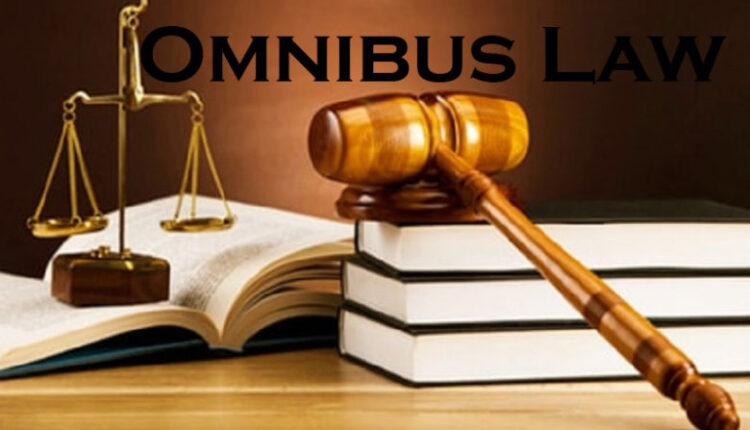 The Omnibus Law Cipta Kerja is Important To Be Ratified Immediately

It is believed that the overlapping regulations in Indonesia are currently an obstacle to increasing investment. The community also supports the ratification of the Cipta Kerja Omnibus Law which is believed to be able to resolve the hyper regulation.

The Indonesian government has an Advanced Indonesia Vision 2045 with a target of becoming the world’s top 5 economic powerhouse. This target is certainly not an easy target and needs to be started in order to be achieved.

However, Indonesia currently still has a lot of bureaucracy and regulations that are considered convoluted, so this has discouraged investors from investing in Indonesia.

On this basis, deregulation and debureaucracy efforts need to be carried out. Many laws and regulations want to be trimmed, changed, even if necessary to create a new aroma where there has been no previous law through one law at the same time popularized by the name Omnibus Law.

According to Edbert Gani, a researcher at the CSIS Department of Politics and Social Change, saying omnibus law is a legal concept. This regulation is made to target a big issue and has the possibility to revoke or amend several laws. Make a law that can take over some of the previous regulations. Immediately made into a package of laws. Other foreign countries also often do this kind of thing.

That means, the omnibus law is a method or concept of making regulations that combines several rules with different regulatory substances into one rule under one legal umbrella. The number of overlapping laws in Indonesia is trying to be resolved through the Omnibus Law.

We need to know that the omnibus law is not old stuff. The Indonesian government also presented this idea to the public in 2017. Then, in September 2019 the Government and DPR RI failed to ratify various bills and revisions to laws, including the Land Bill after drawing waves of protests from the wider community. 1 month later, the government began to intensively voice the Omnibus law.

To pursue recovery and economic targets, the lecturer at the Faculty of Law, University of Indonesia (UI), said that Indonesia should not have a regulatory barrier. Therefore, all important and urgent bills must be passed immediately.

This amount has not been added to regulations and decrees at the ministerial, institutional and local government levels. Unfortunately, these measures are only temporary, while new normal conditions and economic recovery require long-term regulation.

Similar to the statement of the Secretary of the NasDem Party Faction Saan Mustofa. He asked the government to immediately restore the national economic condition after the Covid-19 epidemic ended. One of the efforts is to speed up the discussion of the Job Creation Bill.

We certainly agree that after the Covid-19 pandemic ends, of course there needs to be a recovery carried out by both the DPR and the government.

Meanwhile, the Governor of Bank Indonesia (BI) Perry Warjiyo said that the presence of the Work Creation Omnibus Law Bill was very important to increase investment in the country.

He sees that the Omnibus Law, which is still being discussed in the middle of the government’s efforts to implement an economic recovery program, must get support.

Perry said that the Omnibus Law was proof of President Jokowi’s commitment. In addition to facilitating and making Indonesia’s investment climate friendly to investors, it also accelerates structural reforms.

One of the hopes of the implementation of the Omnibus Law Cipta Bill in the future is that investment in Indonesia will be easier and of course develop faster. This of course will be a breath of fresh air for the workforce to eliminate unemployment status.

On a different occasion, Chairman of the Association of Indonesian Employment Legal Consultants (HKHKI) Ike Farida said, the Ombnibus Law Cipta Kerja can bring fresh air to workers with the provision of job loss insurance (JKP).

The benefits that can be obtained from JKP include training and certification, cash, and placement facilities.