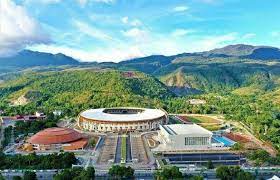 Security forces continue to ensure that PON XX runs safely. The public was also asked not to worry and continue to provide support for the implementation of the event.

Marshal Hadi Tjahjanto as the Commander of the Indonesian Armed Forces, stated that the TNI and Polri will ensure security during the implementation of the XX Papua National Sports Week (PON).

He said that the troop title was proof of the commitment and seriousness of the TNI-Polri ranks and the Papuan Regional Government to make the XX Papua PON event a success. the spread of Covid-19.

For that, Hadi ordered his staff to understand that all security plans, both for the venue, athletes, officials, volunteers, spectators, VVIP and accommodation. each.

Hadi also emphasized that officers should use a cultural approach, as well as a cultural approach and local wisdom in carrying out their duties. Meanwhile, National Police Chief General Listyo Sigit Prabowo revealed that currently personnel from the Police and TNI have been on standby at the designated place.

Sigit has also reminded all TNI-Polri security personnel involved to anticipate the slightest disturbance of security and public order (Kamtibmas) that may occur during the four-yearly sports party, especially in the area and arena where the XX Papua PON is held.

The four-star general also hopes that the local government, assisted by the TNI and Polri, should pursue the acceleration of vaccination in Papua by maximizing the presence of vaccination booths that have been prepared in PON arenas. According to Sigit, with the implementation of the Covid-19 security and control strategy, it can have a multiplier effect, namely the XX Papua PON can run safely, the Covid-19 virus spike does not occur and the creation of economic growth in Papua and at the national level.

The former Kabareskrim also added that the implementation of the XX Papua PON at the same time proves that Indonesia can be in the eyes of the world. Of course, this must be supported by further strengthening the synergy and solidity of the TNI-Polri and other stakeholders.

Previously, the Papuan Police would make maximum efforts to create a safe situation regarding the implementation of the XX Papua PON, which will be held in Papua from 2 October to 15 October. The Head of Public Relations of the Papua Police, Kombes Pol. Ahmad Musthofa Kamal, said that the current situation in Papua is quite conducive and community activities are going well.

Kamal said the armed criminal group (KKB) and the West Papua National Committee (KNPB) were indeed a threat. They exhaled the issue of violence in order to thwart the PON. Even the issue of the attack at the Kisor Preparation Koramil Post, South Aifat District, Maybrat Regency, West Papua, some time ago.

Meanwhile, Kasatgas for Public Relations Ops Deraku-Cartenz 2021, Kombes Pol. Dedy Sumarsono, said that until now the security and public order situation in the four Papua PON clusters has been safe and conducive. TNI-Polri personnel continue to be on standby and guard the match in each venue and it will be held until the end of PON XX Papua.

Security is carried out openly and closed to ensure the safety and comfort of athletes, officials, supporters and visitors. The security of the PON must be maintained, lest the most prestigious multi-branch event in Indonesia be disturbed by parties who do not like the progress of Papua.

Beware of the Third Wave of Covid-19