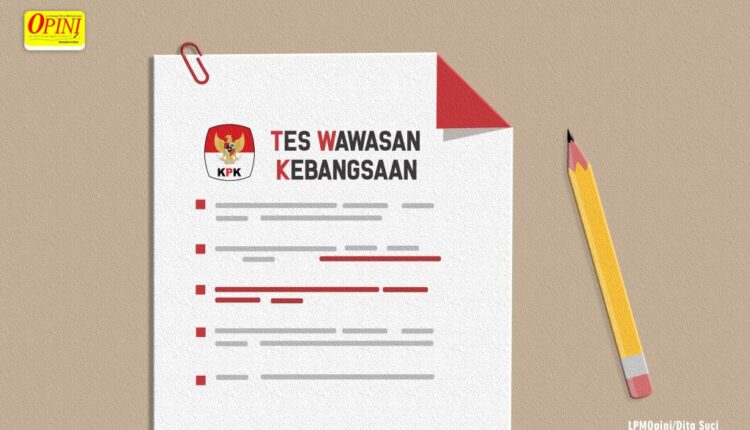 The National Insight Test (TWK) is a standard test for civil servant candidates in order to obtain employees with integrity and loyalty to the state. So it is not true that the TWK of KPK employees is a way or mode to get rid of certain employees.

The national insight test (TWK) is viewed cynically by some people, because there are allegations that this exam is only a tool to get rid of certain employees. In fact, they were wrong, because TWK is a standard test for every CPNS. If KPK employees want to be appointed as ASN, then they must do it.

Even though he has been appointed as ASN since June 1, 2021, there are still some who still have problems with the KPK employees. The reason is that not all workers in Indonesia’s anti-corruption agencies are made civil servants. So it is feared that there will be inequality and envy, even accusations that TWK is a mode to get rid of certain investigators.

Allegations of these cynics were immediately denied by KPK Chairman Firli Bahuri. According to him, there was no attempt to get rid of anyone (from the KPK). The TWK was carried out by 1,351 KPK employees and all the contents, instruments, modules, and time for the examination were the same. In a sense, this test is very fair and there is no intention of overthrowing certain parties.

Moreover, the questions on the national insight test were made by other state institutions, not KPK officials. So that it is impossible for a political game to get rid of an investigator, as some have suspected. State institutions that make questions must be objective and do not know who will be working on them.

Firli added, the final result of TWK is based on the ability of each employee. In a sense, if a KPK employee does not pass the test, it means that he or she does not meet the requirements to be appointed as a civil servant. Because he failed to answer questions about nationalism, Pancasila, pluralism, etc.

The national insight test is divided into 2 sessions, namely written and interview. Assessors who interviewed KPK employees were also professional and had no element of subjectivity at all. Because they have been sworn in to work well, without any interference from other parties such as KPK officials, even the president.

Logically, if there is a game in the national insight test, then the majority of KPK employees will not pass, because it is so difficult. However, in reality, only 75 people failed in the TWK process, aka less than 10% of the total number of employees. So this shows that this test is very objective, not subjective as alleged by cynics.

If there is a KPK employee who does not pass the test, it shows that he lacks a sense of nationalism and Pancasila, and is obedient to the 1945 Constitution. In fact, a civil servant must have these things. So he should be introspective, why did he not pass the test, even though as a good citizen he should have a high level of love for the country.

The KPK is a state institution, so it is natural for its employees to be appointed as state servants. A good ASN must be antipathy to radicalism, terrorism, banned organizations, left wing, etc. So if there is a TWK then this is a very good filter to find out whether they are loyal to the state, or maybe sympathizers of terrorist organizations.

Employees who do not pass the test are still allowed to work at the KPK until October 2021. This shows the kindness of KPK officials who are still humanizing them. So they can still work and get ready to apply for jobs elsewhere. Logically, if there is an attempt to get rid of certain employees, then they will be fired as soon as possible.

The national insight test should not be a problem anymore, because the anti-corruption agency employees have already been appointed as ASN. This test is very objective and is not used as a method to get rid of certain employees, because the process is very fair and professional. Just put an end to this polemic and do something useful.