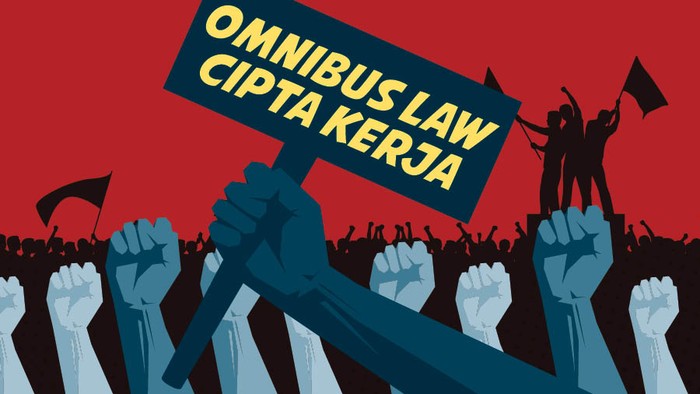 The Ciptaker Law is a breakthrough for the government to increase investment. Through this policy, investment is expected to be more open so that it can increase job opportunities and prevent the mass layoffs that have occurred due to the Covid-19 pandemic.

Demonstrations intensified by workers and students against the rejection of the omnibus law, one of which is because of the assumption that the omnibus law will cause companies to arbitrarily terminate their employees.

However, this was denied by the Manpower Expert of Gadjah Mada University (UGM) Prof. Dr. Tadjuddin Noer Effendi, he said that the initial idea of ​​drafting the Job Creation law (UU) was actually aimed at warding off waves of layoffs. Where a wave of layoffs has the potential to emerge facing the industrial revolution 4.0.

Tadjuddin admitted that he had been involved in the discussion of the Work Creation Bill since 2018. He also emphasized that a response to the wave of layoffs was necessary because Indonesia would enter the era of the industrial revolution 4.0 where many companies would operate technology-based industrial wheels. However, in the middle of the drafting process of the bill, it was hampered by the Covid-19 pandemic that hit the country.

As a result, economic growth fell drastically to minus and a wave of layoffs appeared earlier than previously predicted. In order to help workers or workers affected by layoffs or who were sent home to deal with this situation, according to him, the government then created a program of direct cash assistance (BLT) to subsidize salaries to pre-employment cards.

In the current crisis situation, there is no other way except to bring in investment to restore economic growth in the country which will also have implications for the labor aspect. In order to bring in investment, according to him, the Job Creation Law, which was previously still in process, must be finalized immediately because the 2013 Manpower Act is considered not friendly to investors.

If the old labor law is still used, then Tadjudin is sure that no investors will come to Indonesia. If so, economic growth in the midst of a pandemic situation will continue to be negative.

The Job Creation Law is arguably the umbrella law. In its application, it still requires derivative regulations ranging from Government Regulations to Ministerial Regulations. Of course it is very unfortunate if there are parties who do not understand the substance of the Job Creation Law as a whole. Moreover, the explanation that has been circulating in the community is tinged with hoaxes and disinformation which can ignite people’s emotions.

On a different occasion, the Minister of Manpower (Menaker) Ida Fauziyah said, in the Omnibus Law of the Job Creation Law, there are regulations that state that the government will provide social security in the form of cash and job opportunities.

Therefore, the job loss guarantee program (JKP) has also been added to the Job Creation Law in the labor cluster.

This law provides certainty that the workers / laborers receive the right to severance pay with a scheme in addition to the severance pay provided by employers.

Most importantly, when workers are laid off, the workers will be directed to get work skills training so that later the workers can easily get new jobs.

Then, in terms of protecting workers or laborers who are facing the process of termination of employment, the Job Creation Law still regulates the terms and conditions of layoffs.

The Job Creation Law also provides space for trade unions or labor unions to fight for the interests of their members who are undergoing the dismissal process.

In addition, Ida also emphasized that the Job Creation Law also clarifies wage arrangements for workers or laborers during layoffs and is still in the process to the industrial relations level until a court decision has permanent legal force.

According to Ida, this is in accordance with the provisions of the Constitutional Court in 2011. When there is a layoff process, workers still get wages. This is also confirmed in the work copyright law.

Ida also claims that all workers’ aspirations have been accommodated in the Omnibus Law on Cipta Kerja, which has been passed by the parliament. So that he is of the opinion that the labor strike which rejects the ratification of the bill is irrelevant.

Ida also asked workers and workers who took part in the action today to reread the law that has been passed. He emphasized that the views and aspirations of workers expressed in the national tripartite had been fully accommodated. In a situation like this, of course we shouldn’t be trapped by disinformation or hoaxes circulating.