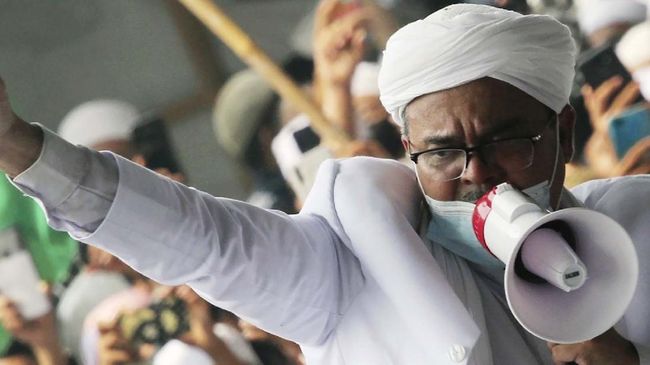 When Habib Rizieq Shihab (HRS) returned to his homeland, thousands of his supporters immediately came to greet him. After that, he took the time to come to the commemoration of the Prophet’s birthday and hold his son’s wedding. The DKI Jakarta Provincial Government should have warned loudly, because it could cause crowds.

The arrival of Habib Rizieq Shihab, which was attended by thousands of people, made people feel sad, because it seemed as if no one had warned them. Even though the HRS supporters were wearing masks, they did not keep their distance and clearly violated health protocols. If an officer reprimands, they get angry and play the victim.

Moreover, HRS who have just arrived from abroad must be quarantined for a minimum of 14 days, before they can be met by their supporters. But instead he refused and didn’t want to re-test the swab. If HRS is behaving like this, why are its supporters still cheering and cheering it on? Are they not afraid of catching coronavirus from OTG in the crowd?

The DKI Jakarta Provincial Government should also be firm in dissolving the crowd of HRS supporters. If at the time of welcoming the FPI commander there were already thousands of masses, then the next event should not be repeated. Because when there was a commemoration of the birthday of the prophet on the 13th, HRS walked freely and the crowd again occurred.

The firmness of the DKI Jakarta Provincial Government is needed, because Rizieq Shihab plans to hold a walimah alias wedding party for his daughter, Najwa Shihab. In an ordinary person’s party, the invitation can be hundreds of people. Moreover, HRS, who in fact is a FPI recipient, is expected to have another crowd of members of mass organizations and their sympathizers who violate health protocols.

After HRS was at home, DKI Governor Anies Baswedan immediately stayed in touch, while seducing HRS to want a swab test in Indonesia. However, many netizens regretted why Anies did not all warn that Najwa’s wedding ceremony should not invite a crowd, because we are still in the period of the Covid-19 pandemic.

Abdul Mu’ti, PP Muhammadiyah Secretary, said that the covid task force team and the competent authorities (in this case the DKI Jakarta provincial government) had the courage to dismiss the event that invited the crowd. He regretted that the party held by HRS should comply with health protocols. Because it is feared to form a new corona cluster.

According to the standards imposed by the Covid task force team, during the pandemic, a marriage contract is allowed but a maximum of 30 people is invited, including family. When the contract is held at the mosque, the maximum capacity is 50%. If it violates, of course, it must be discrete, even though he is a famous figure. Because there is no such thing as being above the law, even though they are religious leaders.

But unfortunately, even though the marriage contract was held privately, the party was intended for the public. This was stated by Aziz Yanuar, a lawyer for FPI. Almost everyone was invited, from the governor, politicians, to mass organization sympathizers. Aziz Yanuar’s statement is striking because he also supports the violation of health protocols and deliberately against government regulations.

Habib Rizieq Shihab as a public figure should understand that it is still the Covid-19 pandemic, but it seems as if he deliberately violated it. By throwing a massive party, it’s as if we’re back to normal. Is it because you feel friends with the governor? The community became suspicious of the two people.

We are waiting for the firm stance of the DKI Jakarta provincial government to deploy the Covid-19 task force team and the authorities to disperse the crowd at the event attended by HRS. Don’t just think that he is a public figure and then get privileged. As an Indonesian citizen, he should be obliged to obey health protocols for his own safety.

Papua is part of Indonesia