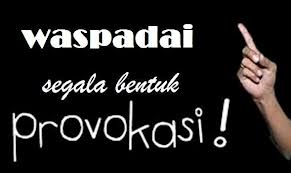 WE ARE Community Provocateurs

Our existence failed to gain a place in the hearts of the people because they were seen as provocateurs. They can only insult the government, which is considered to have failed to run the country but did not show how to save Indonesia. No wonder there are more and more demonstrations in the regions that refuse the entry of OUR members there.

When the Coalition for Action to Save Indonesia (WE) declared last August 18, its members argued that they wanted to express their views, because Indonesia is a democracy. WE also put ourselves in the opposition and want to criticize the government. Even Indonesia is likened to a ‘shipwreck’ so it needs to be saved.

Unfortunately they are even considered provocateurs because they continue to insult the government. It is as if there was no attempt by the President to save Indonesia from recession. The public can be apathetic towards the government because they think there are no definite steps to make the country’s condition better. In fact, there is social assistance and other assistance for the people.

WE also continue to demand the government to solve all problems in Indonesia. Especially in the economic field. According to politician Sarmuji, it was as if WE were asking the government to play magic. Because the world economy has also plummeted, Indonesia’s finances have been affected. WE should study about the international economy in order to understand the relationship.

In our 8 demands, they seem to show the ugliness of the government, which is considered unable to manage the country. This demand was very emotional and provocative, it was even read out twice. According to observer Karyono Wibowo, these demands should be measured and realistic. If you criticize, it must be constructive and objective, and accompanied by correct data.

OUR demands are considered provocative because they contain things that can burn people’s emotions. In the first point there is an insistence that the state be regulated in accordance with Pancasila. People think that the government does not uphold Pancasila, so they go around it. They become lazy to obey the government’s appeal, even though this regulation is for mutual safety.

Meanwhile in the second point it is stated that the government must be serious and swift in dealing with the effects of the corona pandemic. The public may think that there is no assistance for covid patients, even though in fact the hospital fees are 100% free. Health workers are also assisted by volunteers and receive intensive money. Accusations of handling corona can be considered slander.

This provocation could have a long lead because the community turned to hate the government and disobeyed health protocols. They were even angry when they were fined 250,000 for not wearing masks. The government is being blamed. Corona clusters can increase in number because everyone is disorderly, with the assumption why obey if the government is ignorant?

In the third demand, it is stated that the government must save native entrepreneurs from foreigners. This is the most violent provocation, because Indonesia has so far cooperated in the economic and health sectors with China, America and other countries. From this demand, an opinion can emerge that this country has been ‘bought’ by foreigners.

In fact, President Joko Widodo has never sold Indonesia just for business gain. If there is foreign investment, it will be regulated by strict laws, so that the cooperation will benefit both parties. There is also no domination of power from foreign parties.

These points in OUR demands that split society into pro and contra camps. As senior figures, they should have reconciled the condition of Indonesia. However, in reality they became provocateurs who could only talk and sue with unclear accusations. And not based on reality.

Don’t get burned with OUR provocation because they deliberately make the country chaotic and seek sympathizers. So far, they have only sought public attention and issued controversial statements. The goal is that people become sympathetic and influenced by their chatter.

) * The author is a contributor Rim and the Student Press Cikini