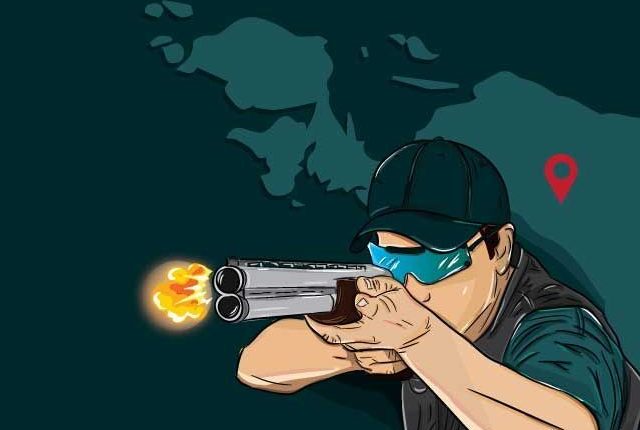 Without Compromise, the Government Actions Decisively on KKB Papua

By: Abner Wanggai) *
The armed criminal group (KKB) went crazy with another attack in the Intan Jaya area, Papua. The government has never been afraid of their threats, because it is just a bluff. Why compromise with separatist and traitor organizations? KKB must be eradicated and will end up badly in time.
KKB is an organization under the OPM that is notorious for its cruelty. They do not hesitate to commit atrocities, both to the police and to Papuan civilians. All threats were carried out, because they believed in unifying to form the Federal State of West Papua and wanted to leave the Republic of Indonesia. So that Indonesia is considered an enemy.
Residents in Sagupa District, Intan Jaya Regency, were once again disturbed by the KKB action. On February 8, 2021, they were forced to flee, after a criminal act was committed by the separatist group. A total of 600 people took shelter in a church, to avoid attacks and shots from KKB.
The government acted quickly by sending more officers to jump into Intan Jaya. They may take decisive and measured actions in order to maintain the security and peace of the citizens. This action was allowed, because the KKB had always been in action at Intan Jaya, up to 5 times. So that disturbs the community there.
Deputy V KSP Jaleswari Pramodhawardani stated that the security of the residents there is the responsibility of the government. So, the Regent of Intan Jaya and a number of other officials were asked to return there and not lead from Nabire. In that sense, the atmosphere is already conducive and they are expected to return, so that the people also feel safe and are no longer displaced.
The central government will not compromise the KKB. The attacks they carried out, both in Intan Jaya and in other areas, were believed to have been a bluff. The government will not hand over Papua and they failed to establish the State of West Papua, only because of the terror of the KKB.
So far, KKB and OPM have not been 100% eradicated because they acted cunningly, hiding in the middle of mountains and wild forests. Natural factors are difficult to pass, causing fishing to be unfinished. However, the apparatus acted as well as possible. So that the KKB can be eradicated and the Cendrawasih Earth is safe again.
Meanwhile, Intan Jaya was well-known in the eyes of the public because it was relatively often harassed by KKB. The attack was carried out there, because the KKB demanded that special autonomy and mining of agricultural products in Papua be stopped. So they terrorize the community to fulfill their wishes.
If using logic, how can they reject special autonomy? Even though not every province enjoys it, because there are special funds allocated for regions with the status of Otsus. In fact, Otsus is used by the Papua and West Papua regional governments to build various facilities. Such as bridges, school buildings, stadiums, roads, and others.
How can the KKB reject progress thanks to special autonomy funds? Even though the budget was increased, so that the billions were used to develop Papua, so that it became more modern and was no longer synonymous with backwardness. It would be strange if they resisted progress, for ignorance would only torment.
Otsus will continue in Papua even though it is under threat of a KKB. The apparatus will act very firmly and secure all government programs, including special autonomy. Because the government hopes that there will be no imbalance in progress between eastern and western Indonesia. So that prioritizes the principle of justice.
The KKB, which has committed atrocities repeatedly, must be destroyed as soon as possible. Because they always suspected that someone was a spy, even though he was just an ordinary civilian. They also threaten the smooth running of Otsus Papua. So that its existence is even more unsettling. The authorities are obliged to roll them up to the ground, to the roots, so that the Papuan people are safe and peaceful.

Examination of Ex FPI Figures Regarding Prokes According to the Rules