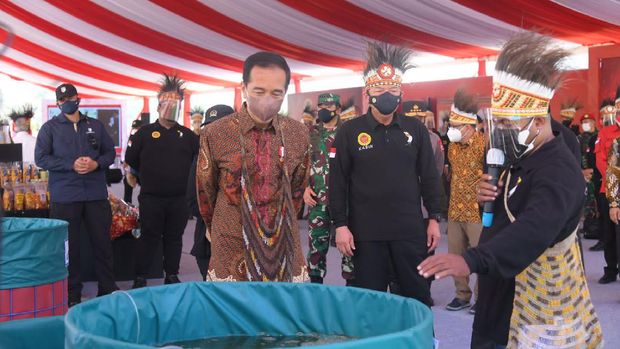 Youth Papua Creative Hub is believed to be able to advance Papuan human resources. With the increasing human resources of Papua, the development of Papua and Indonesia will be more optimal.

President Joko Widodo (Jokowi) on his opportunity to visit Papua, held a ground breaking for the Papua Youth Creative Hub (PMI) building. This building will be used as a driving force to develop the talents of Papuan youth.

The construction of the building for PMI is planned to be completed on October 11, 2022, which is located on Jalan Poros, Abepura District, Jayapura, Papua. In his speech, Jokowi said that his party wanted to provide as much space as possible after Jokowi met with the PMI community. Then there was the idea of ​​creating a Papua Youth Creative Hub in this place based on field directions, field inputs obtained from the head of BIN.

He also said that there were not only hundreds of people gathered in Inspirational Papua, but thousands, so that it is hoped that in the future the Papua Youth Creative Hub can become a driving force, become a center for developing great talents in Papua, and become a creative center for young Papuan people in their development. strengthen the existing innovation system.

The former governor of DKI Jakarta said that the construction of the Papuat Youth Creative Hub is expected to explore the creative potential of Papuan youth. Jokowi believes that the potential of young people is still a lot and needs a place to be released.

President Jokowi believes that there is still a lot of unexplored and undeveloped potential. That is our responsibility both in Papua and West Papua, where there are many excellent seeds and excellent talents in the fields of science, cultivation, and in the field of sports. And it is our duty to prepare a good and organized talent management.

He also said that in this building there is a bright future for creating the talents of young people in Papua. Starting from entrepreneurship, millennial farmers, to Papuan youths who have talent in the field of digitalization.

On the same occasion, Head of the State Intelligence Agency (BIN) General Pol (Ret.) Budi Gunawan said that the Papua Youth Creative Hub building would refer to buildings that are identical to Papuan land. Budi said this building will accommodate all the talents of Papuan and West Papuan children in developing creativity.

Budi added that the construction of the Papua Youth Creative Hub building is also a new history as well as a pioneer of progress for the Papuan youth generation. The Papua Youth Creative or Papua Muda Inspirasi has apparently had 2,025 members. This has developed since the first time in 2019 when he met with President Jokowi, there were 21 people.

The construction of the Papua Youth Creative Hub building will involve the Ministry of Public Works and Public Housing (PUPR) at a cost of up to Rp. 95 billion and is targeted to be completed in October 2022. Construction of the Papua Youth Creative Hub will be carried out by the Ministry of PUPR through the regional settlement language center. (BPPW) Papua, Directorate General of Human Settlements.

The Millennial Special Staff (Staffsus) of the President of the Republic of Indonesia, as well as the CEO of the Kitong Bisa Foundation, Billy Mambrasar considered that the Special Autonomy program was an important program. Because with this policy the younger generation in Papua and West Papua can become more educated, so they have a higher chance of success or ideals.

In the virtual discussion opportunity, Billy said, the enthusiasm for the special autonomy allocation was highest for education, he also admitted that he came from a poor family, but could take higher education using special autonomy funds. According to Billy, the best investment is in people. Because that way, civilization will wake up automatically.

Meanwhile, Head of BPPW Papua, Directorate General of Human Settlements, Ministry of PUPR Cornelis Sagrim said, Papua Youth Creative Hub was built on an area of ​​15,000 square meters. The main building area will be approximately 3,350 square meters and the supporting buildings will be 1,812 square meters. Apart from that, dormitories and parking spaces will also be built.

Cornelis had said that the Papua Youth Creative building would be equipped with spaces such as a co-working space, exhibition space, theater room, as well as a culinary and health research space.

We must support optimism about Papua’s development, especially with various developments in Papua, such as the construction of international stadiums.