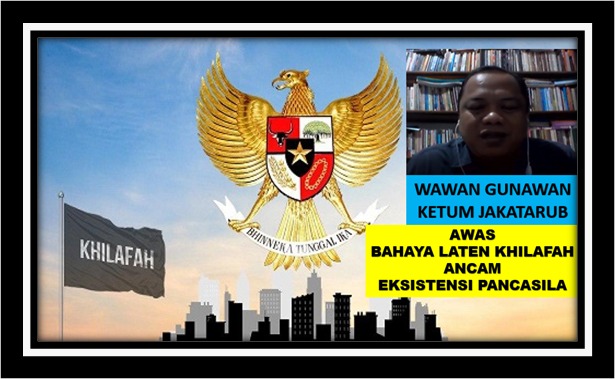 Chairman of Jakatarub Wawan Gunawan: Beware of the Danger of Latent Khilafah Threatening the Existence of Pancasila

Jakarta, CIDISS.CO – General Chairman of the Inter-Religious Network (Jakatarub) Wawan Gunawan said the Indonesian people must be aware of the latent dangers of the Khilafah because it can threaten the existence of Pancasila as the ideology of the Indonesian State. Pancasila has been proven to unite Indonesia and Pancasila is a gift for Indonesia, which has diversity.

This was stated by Wawan Gunawan in an online dialogue on the Pancasila TV National Dialogue program in Jakarta, (21/7).

On the other hand, there is a group of people who want to eliminate the traces of history and want to live in compartments, wanting to live in an environment that is led by a caliphate system. They have dissatisfaction with the existing system. If Indonesia is still considered lacking, it should not build a new house, but instead let’s build it together so that Indonesia can become a joint home for the Indonesian nation, said Wawan.

Pancasila has been proven to be able to unite 15,400 islands, to unite 714 languages, to unite this diverse Indonesia. Pancasila is a gift for Indonesia, said Wawan.

Wawan Gunawan explained that in the diverse context of Indonesia in terms of ethnicity, religion and others, the Founders of the Indonesian nation such as Soekarno, Bung Hatta, KH. Hasyim Ashari, KH. Wahid Hasyim, Ki Bagus Kusumo have chosen the Pancasila state concept instead of the Khilafah concept. This has also been based on religious thought and has actually become an interfaith ownership in Indonesia. That’s why those who live Pancasila in all religions, such as Father Magnis, wrote the concept of Pancasila in a Catholic perspective, then the late Eka Dharma Putra wrote a lot about Pancasila in the Christian concept, and Gus Dur wrote a lot about Pancasila in an Islamic perspective, so Pancasila accommodates all of them.

Based on the results of the LSI Denny JA survey, in the last 13 years pro-Pancasila decreased by 10 percent, which assesses that Indonesia with the system of NKRI under sharia alias Khilafah has increased by 9 percent. This will be a latent danger for the existence of Pancasila. So what Defense Minister Prabowo Subianto said that Indonesia could disband in the next 30 years could be true if this is allowed to happen. This, of course, must be watched out for, said the General Chairperson of Jakatarub.

The government’s disbandment of HTI and FPI was appropriate because the two mass organizations clearly undermined Pancasila because they often said Pancasila was not from Islam. “What’s interesting is that many of the founders of the Indonesian nation came from Kyai and religious experts who throughout their lives have been continuously in Islamic boarding schools and Islamic schools and in one breath are also a state where they assess Pancasila as the right ideology for a pluralistic Indonesia,” said Wawan.