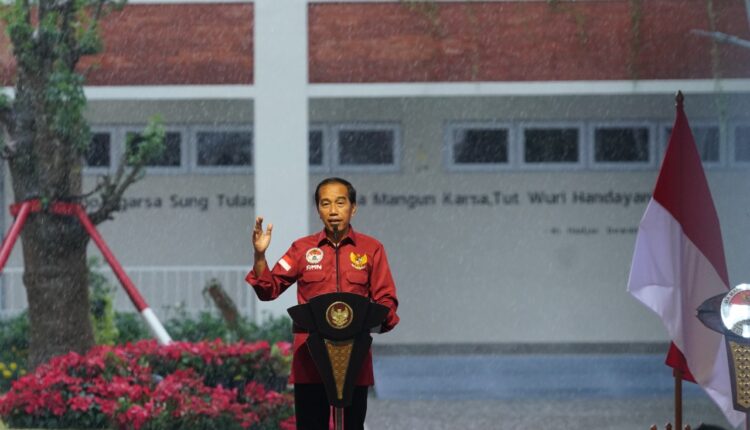 Surabaya – President Joko Widodo today inaugurated the Nusantara Student Dormitory (AMN) in Surabaya, East Java. The inauguration of AMN in Surabaya as a unifying forum for Indonesian students consisting of various ethnicities, languages, cultures and religions originating from various regions in Indonesia and from various universities.

After the inauguration, it was continued with an inspection of the AMN Surabaya Building, including going to the Mural Park and the rooms in the AMN Building where the students were active, and closed by planting a Baobab tree symbolically by President Jokowi.

The inauguration of AMN Surabaya marked the emergence of a new era of diversity within the framework of the Unitary State of the Republic of Indonesia based on Pancasila and the 1945 Constitution , said President Jokowi, Tuesday 29/11/2022.

President Jokowi said that the first proposal regarding AMN came from 61 Papuan figures who at that time came to the State Palace.

Furthermore, President Jokowi said that Indonesia has 714 different tribes. This means that diversity is a strength, not a weakness.

“Indonesia’s diversity is a strength, not a weakness. If we can be compact, harmonious, and united. Therefore, I immediately conveyed and agreed to this proposal regarding AMN , “Jokowi said.

During the inauguration ceremony, President Jokowi also conducted a connected video conference at the location where the AMN development was announced in Makassar City and Minahasa Regency.

Apart from Surabaya, AMN is planned to be built in 5 other cities including Makassar, Minahasa, Bantul, South Jakarta and Malang.

President Jokowi hopes that the development of AMN can strengthen relations between the nation’s children and eliminate the potential threats of Terrorism, Radicalism, Intolerance and Separatism (TRIS) which often occur in various regions.

Head of BIN: AMN Produces Future Nation Leaders who are Competitive and Have the Spirit of Defending the Country