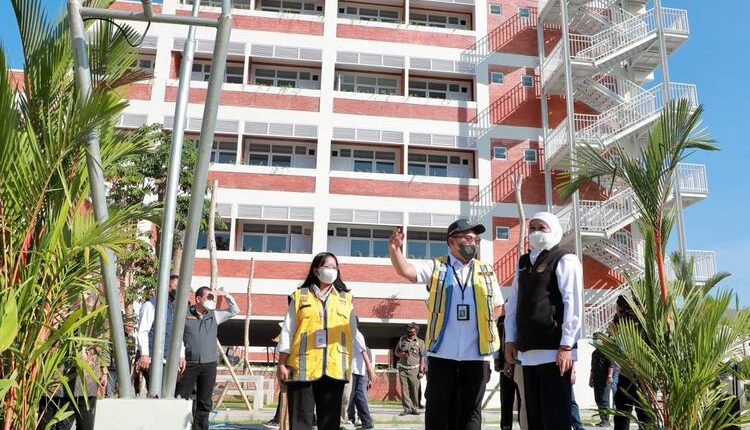 The government continues to strive to realize the motto Bhinneka Tunggal Ika for all students. One of these efforts is the construction of the Nusantara Student Dormitory (AMN) in Surabaya, East Java, which will be followed by the construction of AMN in various other areas.

Apart from Surabaya, AMN development is also planned to be carried out in 6 cities/regencies across Indonesia, namely Jakarta, Bantul, Surabaya, Malang, Makassar and Minahasa.

The Director General of Cipta Karya, Diana Kusumastuti said that the Archipelago Student Dormitory (AMN) was not only intended for housing. However, this place also functions for various other activities that are coaching for students.

“Apart from being a residence for outstanding students receiving scholarships, AMN Surabaya also functions for coaching activities whose implementation is supported by the State Intelligence Agency (BIN),” he said.

The State Intelligence Agency was specifically appointed by President Jokowi, as the catalyst for the establishment of this AMN. This is because the mandate given to BIN is to protect the country and the threats of ideas that divide the archipelago. BIN also projects AMN as Candradimuka as a Candidate for National Leader.

In collaboration with the local provincial government, the PUPR Ministry and other related agencies, BIN has succeeded in building this Nusantara Student Dormitory, so that it is finally ready to be inaugurated by President Jokowi. Not only that, in organizing and coaching its students, BIN also cooperates with various parties in creating a young generation of achievers who love the motherland and uphold the Diversity of Indigenous Peoples.

During his visit directly to AMN, the Governor of East Java, Khofifah Indar Parawansa also revealed that the existence of AMN is a miniature place for forming prospective national leaders with an archipelago perspective with the character of Bhinneka Tunggal Ika.

Not without reason, the article is that within AMN itself, it really reflects how diverse the students are but they are still able to form a brotherhood in harmony with one another.

“This is expected to be a miniature formulation of prospective leaders who have an Archipelagic perspective with the character of Unity in Diversity. They can give each other an appreciation of the differences and diversity of each ethnic group, language and religion of each student,” he said.

Furthermore, Khofifah emphasized that the main breath of the AMN development is how to be substantively physically and mentally able to produce prospective leaders of this nation with a diversity character.

“How can we prepare a format for leaders with an archipelago perspective with the character of Unity in Diversity substantively physically and spiritually. I think that’s the breath of the Archipelago Student Dormitory,” he continued.

Apart from that, the treatment at AMN also really reflects the principle of the motto Bhinneka Tunggal Ika, because there is absolutely no discrimination to differentiate race, religion, ethnicity or language to the area of ​​origin of the students. Everyone has the same opportunity to be able to settle down and take advantage of all the existing facilities.

“So students from various provinces in East Java, especially in Surabaya and its surroundings, can get facilities to occupy Indonesian student dormitories. Of course through registration and selection,” explained Khofifah.