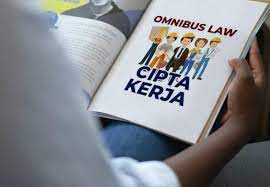 Currently, the Government will make the acceleration of the revision of the Job Creation Law a top priority and it will really be considered in the process. Not only will this accommodate many inputs from all Indonesian people, but will also pay attention to the handling of multidimensional crises.

The government will continue to make every effort to accelerate the growth of the national economy. One of them is by enacting a policy that benefits many parties, including the workers and the workers themselves.

Expert Staff for Regulation, Law Enforcement and Economic Resilience at the Coordinating Ministry for the Economy, Elen Setiadi, said that so far his party was continuing to prepare for the revision of the Job Creation Law in accordance with the decision of the Constitutional Court (MK).

For him, the improvement mainly concerns the omnibus as a definite, standard and standard method and method as well as the systematics of the formation of the law, the improvement will also be related to the maximum participation space for the community (meaningful participation). Not only that, but his party is also preparing an academic document and a draft bill that is being discussed with a team of experts or academics in the context of drafting improvements to the job creation law.

Elen also added that the regulation regarding the omnibus method in the formation of laws and regulations, strengthening meaningful community involvement and participation, the formation of legislation electronically to facilitate access for persons with disabilities.

Regarding the completion target, he explained that his party would continue to follow the time determined by the Constitutional Court, which is up to 2 years from the Constitutional Court’s decision. Even so, the settlement could have been carried out more quickly in accordance with current conditions, namely by paying attention to the global situation and developments regarding the 5C multidimensional crisis, namely covid, climate change, commodity price instability, conflict and cost of living.

Meanwhile, the Secretary of the Coordinating Ministry for Economic Affairs, Susiwijono Moegiarso, said that there were no basic things or substances that were changed regarding the Job Creation Law, but the Government also continued to ask for feedback or input from all parties from the community.

It should be noted that the ratification of the Employment Creation Law is a form of the Government’s strategic steps in continuously spurring economic growth, including the implementation of structural reforms with efficient bureaucratic reform, simplification of business licensing, harmonization of regulations, creating job opportunities and increasing quality investment.

The Head of the Job Creation Law Task Force, Mahendra Siregar said that in the midst of the pandemic and global economic conditions, Indonesia itself continues to carry out various ambitious reform agendas, especially in developing the investment climate in the country. The presence of the law is a quick response from the Government to accelerate economic growth which is expected to encourage economic growth of up to 5.7 percent to 6.0 percent through employment, increasing competence, increasing productivity, increasing investment, and empowering MSMEs and cooperatives.

Mahendra added that there was indeed no other choice for Indonesia to accelerate its economic recovery towards a return to around six percent. Therefore, Indonesia stole the start in carrying out a comprehensive investment reform and business climate improvement agenda so that it hopes to create up to three million jobs per year.

It is also known that the priority issues being worked on by the Government regarding the Job Creation Law are the follow-up of its implementation, namely synchronization of regulations, integration of systems, institutions and Human Resources (HR), business processes and affirmation of micro and small businesses and regional customs.

Mahendra also added that if the follow-up is not carried out quickly, employment will move to other countries, the competitiveness of job seekers will be relatively low, the unemployment rate will be high and Indonesia will be trapped in the middle income trap.

Responding to the feedback that the Government continues to receive from all parties at large, the Chair of the Synergy Substance Socialization Working Group (Pokja) on the Socialization of the Job Creation Law Task Force said that with this feedback, the Government itself will immediately make improvements and implementations.