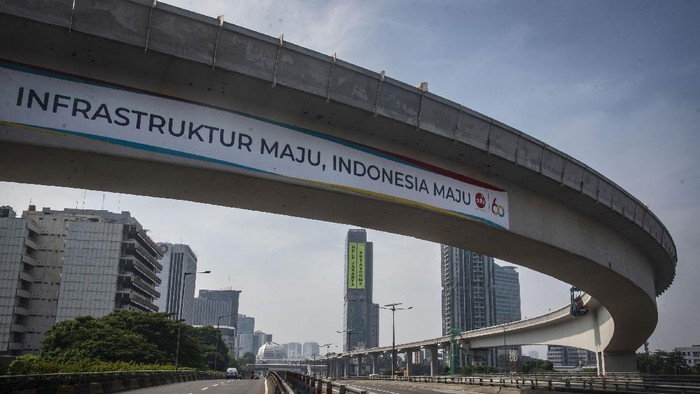 Infrastructure development national currently encouraged by the government for sustain Indonesian economy . If you want changed status to developed countries then that is necessary repaired first time is infrastructure because will make it easy mobility society . As a good citizen so We must help for help for success development the .

The government is very active in development infrastructure national . There are many very infrastructure built , start _ from bridge , road highway , road toll , up to dam . this development of course need many cost but totally worth itwith result , because have effect positive to Public civil .

Even during a pandemic , development infrastructure national carry on continue and projects no will stop , of course with obey protocol strict health . _ Precisely development this is what the government is pushing for the sake of saving economy at the moment hard .

When there is project road toll so need many worker so that Public can apply and get decent livelihood . _ Infrastructure development like road tolls are also profitable people because make it easy access road for them . If anything convenience so will also have an impact on the economy citizens , especially those with status merchant , because they can do mobility with current and costs relatively affordable .

Minister of Works Public and Public Housing (PUPR) Basuki Hadimuljono state that development infrastructure in Indonesia has resolved in 2022. Among them are the Trans Papua Road, the Trans Kalimantan Road, the Trans Java Toll Road and the Trans Sumatra Toll Road, and the East Nusa Tenggara border . Besides that there is also a bridge Tayan in West Kalimantan and the Red and White Bridge in Ambon.

Achievements work of the Ministry of PUPR in 2022 has sustain country ‘s economy and improve power positive competitiveness . _ Index Power Indonesia’s competitiveness rose from 41 to 36 ( according to data from world Economic Forum ). Whereas Index Power competitive Infrastructure up from 60 to 52.

In meaning , development infrastructure truly beneficial for country ‘s economy . After roads and bridges awakened so economy improving . the cause because mobility Public so smooth and smooth work too them .

Then , the infrastructure is also improving economy because is requirements for foreign investors . They want to embed capital with condition must there is adequate infrastructure . _ With investors come _ the country ‘s foreign exchange will rise and the economy will go up too.

Moment the country ‘s economy rose then a feeling society the benefits . Indonesian can go out from impact pandemic . Inhabitant can recover its economy and livelihood return improved , even more forward .

Development is thing that goes on done by the government , and the Indonesian government continues build so you can be a developed country , isn’t it medium like moment this . Infrastructure development very urgent because make it easy Public in activity everyday . Housing is very important for occupancy people .

Then , one vigorous infrastructure _ built by the government is dam . President Jokowi has official Dam Karalloe in Gowa , South Sulawesi. Exact dam _ are in the District Tompobulu this can irrigate up to 7,000 hectares land agriculture , and built with budget of 1.27 trillion .

President Jokowi stated that moment there are 7,000 hectares land earned agriculture _ water supply from Dam Karalloe so they more often harvest . The count , 2 times planting rice and 1 time planting palawija . So the farmers will get profit more a lot and increasing his welfare .

inauguration dam Karalloe appreciated by society . They no look magnitude budget that has spent for make infrastructure this , however more focus to the benefits . When it’s harvest time more often so farmer happy because get cuan many times. Profession farmer not again identical with poverty , because they can prosperous blessing successful harvest _ keep going .

Support from society is also needed in development infrastructure national , how with pay tax . As good citizen _ so must for obey rules and pay tax in accordance with owned salary . _ If you feel difficulty because payment cut moment pandemic , then can submit restructurisation tax as the solution .

Tax here ‘s what will made as internal capital development infrastructure nationally , and you can also enjoy the benefits , right ? So tax money will back to the people in form infrastructure . wise man obey tax .