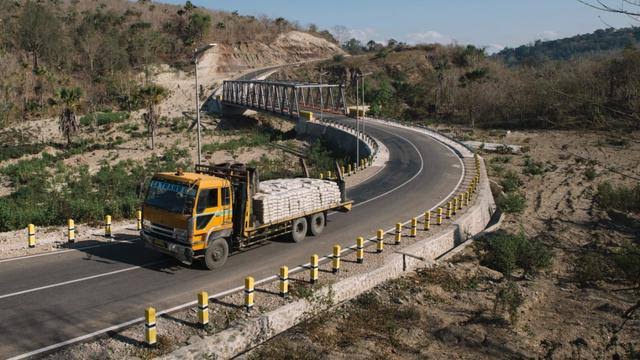 The government has carried out infrastructure development in NTT for the sake of equal distribution of development throughout Indonesia. This is very beneficial for the local community because it will increase the wheels of their economy as MSMEs, also including some access to clean water and electricity so it is very worthy of appreciation.

One of the nawacitas promised by President Jokowi is to ensure that development is evenly distributed throughout Indonesia so that it is not only centered on Java or Java-centric, but that all corners of Indonesia are able to be touched by proper development and facilities.

Recently, President Jokowi visited Labuan Bajo directly on his agenda to inaugurate several infrastructures there. There are many development projects carried out, starting from the improvement of the supporting facilities in Loh Buaya Tourism, including on Rinca Island which is part of the Komodo National Park and the construction of the National Tourism Strategic Area (KSPN) at Marina Bukit Pramuka Beach.

Also attending the visit made by President Jokowi in NTT, Sugeng Rochadi as President Director of Brantas Abipraya stated that after the completion of the two infrastructure projects, his party showed a commitment to really support the development of facilities and infrastructure, which of course is an effort to improve infrastructure. tourism is a super priority destination so that the face of Labuan Bajo becomes much more beautiful later.

It should also be noted that so far Abipraya has carried out many restructuring developments such as the construction of counters, ranger accommodations and tour guides which are also equipped with research posts and monitoring of the Komodo dragon habitat so that the reservation of one of the ancient animals native to Indonesia can continue properly. . The construction of a resort inn has also been completed, the work of the Komodo Museum, including a cafe and also a souvenir center, including office buildings and places of worship, gazebos to medical needs in the form of a clinic building and not to forget the exterior of the information center building.

Furthermore, to answer a series of questions from pro-environmental parties because they are worried about the threat to the Komodo dragon’s habitat, Brantas Abipraya emphasized that the process of building facilities and infrastructure that took place there did not damage or disturb the habitat of the Komodo dragon. In addition, this is also an effort to protect the Komodo National Park which has indeed been included in the UNESCO World Heritage Site so that it has legality in the form of Outstanding Universal Value (OUV).

Regarding the existing arrangement in the Marina-Labuan Bajo area, Brantas Abipraya has also turned it into as beautiful as possible even with world-class facilities but also while paying attention to sustainability and also maintaining environmental aspects.

Regarding sustainability efforts and also being able to protect the environment, the Ministry of Public Works and Public Housing (PUPR) has also built a Waste Management System (SPS) in Labuan Bajo, NTT. The construction of the SPS will not only improve the quality of services there, but of course will also help as a tourist attraction because according to the Minister of PUPR Basuki Hadimuldjono, that a tourism place will certainly be very comfortable if its cleanliness is well maintained including sanitation and clean water.

Minister Basuki also stated that the new habit of all Labuan Bajo people to start being more aware of environmental cleanliness must also be monitored and accompanied. For this reason, the Ministry of PUPR also collaborates with the NTT Provincial Government and also the West Manggarai Regency Government so that the environment is maintained.

Regarding efforts to be active and maintain environmental cleanliness in the parisiwata area, the Governor of NTT, Viktor Bungtilu Laiskodat gave high appreciation to the government, especially the Ministry of PUPR. According to him, so far the Government has really shown its commitment to be able to make development even in all regions in Indonesia, especially in NTT, Labuan Bajo. In addition to that, for him, the things that have been done by the Ministry of PUPR are very helpful because the conservation habitats found there are much more well-maintained and well-maintained.

The president director of Brantas Abipraya, Sugeng Rochadi, hopes that after the development in the area, it will be able to become a new attraction so as to bring in many tourists from within and outside the country. This will certainly be an advantage for the revival of the economy in the country. In addition, there will also be many art activities to U . promotions