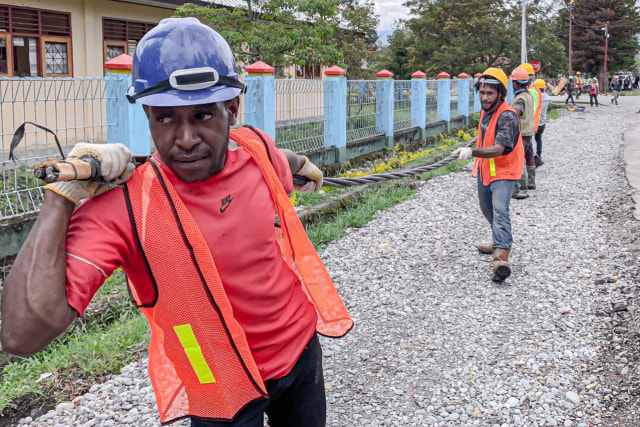 The government channeled large funds for the development of Papua and West Papua. The community was also asked to participate in guarding the funds so that they were right on target and people’s welfare could be achieved.

After the reform era, there was a change in the system from centralization to decentralization, aka regional autonomy. Each province is given the authority to manage its own area. In addition, the government is also trying to ensure equitable development so that progress is not only in Java, but also from Sabang to Merauke.

Papua and West Papua are also 2 provinces that are prioritized to be more advanced and not inferior to other regions. Therefore, the government made a special autonomy which was launched in 2001 and extended in 2021, and through this program, Papua was given large funds to develop its region, to make it more advanced and prosperous.

Unmitigated, the government poured funds amounting to 84.7 trillion rupiah for development in the provinces of Papua and West Papua. Funds of that amount are not only from the special autonomy budget, but also from additional infrastructure funds, additional transfer funds to regions and village funds, transfer funds from ministries and institutions. This was stated by Adriyanto, Director of General Transfer Funds at the Directorate General of Fiscal Balance (DJPK) of the Ministry of Finance.

This amount of money is very reasonable because it is divided into 2 provinces (Papua and West Papua). The amount of money is also more than 2 years ago because of inflation. In addition, these funds are for development and in Papua the price of cement and other materials is more expensive than in Java, so it is reasonable to spend trillions of rupiah.

With money of up to tens of trillions of rupiah, it can be used to develop Papua and West Papua. The first is physical development by constructing infrastructure such as roads, schools, hospitals, and other buildings. If there are such facilities, people’s lives will be easier. They do not have to go to other cities for treatment because there are adequate health facilities, along with medical personnel.

The funds provided by the government are also in the form of scholarships for elementary school to university students, and there have been a lot of successful Otsus scholarship alumni. The most successful in his career is Billy Mambrasar, who can study up to master’s degree abroad and is currently a special staff for the millennials of President Jokowi.

In addition, financial assistance from the government is also used for vocational education by building job training centers (BLK). With the BLK, those over the age of 20 also have the opportunity to learn new skills, such as baking cakes, applying makeup, managing a workshop, etc.

Andriyanto continued, the central government and regional governments should not have to make the exact same program. The reason is for the sake of budget efficiency. This is where the creativity of the local governments of Papua and West Papua is tested, can they make programs that are efficient but useful for the people?

With these programs, it is hoped that further progress will be made in Papua. The Papuan people are Indonesian citizens, so they are also obliged to get the right to life for the people and equitable development. Everything must be fair from Sabang to Merauke.

The government does not hesitate to provide funds of up to trillions of rupiah for progress in the provinces of Papua and West Papua. The people there also have the right to live in prosperity and enjoy facilities like in Java and other provinces. Supervision must also be tightened so that the funds are actually made for development in Cendrawasih Earth.

Supports Door to Door Vaccination to Prevent the Spread of Omicron