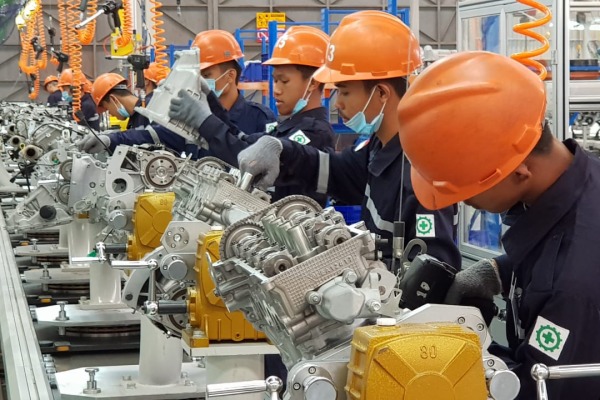 The government continues to strive to transform the economy to focus more on the development process of the non-oil and gas industry. Until now, Indonesia is still a destination for investment in the manufacturing industry in the midst of uncertain economic conditions.

The Coordinating Minister for the Economy (Coordinating Minister for the Economy), Airlangga Hartarto said that the manufacturing industry is considered more productive and can provide wide-ranging effects so as to increase the added value of raw materials, increase workforce, generate the largest source of foreign exchange, as well as the largest contributor to taxes and customs duties.

According to Airlangga, one of the reasons why Indonesia’s manufacturing industry is the largest in ASEAN is because the economic system in Indonesia is included in the  one trillion dollar club  group, which is clearly different from other countries in ASEAN.

According to data from the Investment Coordinating Board (BKPM) from January to September 2022, the manufacturing industry sector contributed 40.9% to total investment which reached Rp892.4 trillion. Cumulatively, investment in Indonesia grew 35.3%  year-on-year  ( yoy ) and reached 74.4% of the target of IDR 1,200 trillion in 2022.

Meanwhile, foreign investment (PMA) in the manufacturing industry sector reached Rp260.3 trillion. The sub-sector that contributed the most was the basic metal industry, metal goods, non-machinery and equipment, which reached USD 8.5 billion or supported the equivalent of 25.3% of all FDI realization which was at Rp479.3 trillion.

The Minister of Industry, Agus Gumiwang Kartasasmita explained that Indonesia is still an investment destination for national and global manufacturing industry players despite the current uncertain world economic conditions. This is reflected in the realization of investment in the manufacturing industry sector in the January-September 2022 period, which reached Rp365.2 trillion.

Agus added that this achievement increased by 54 percent compared to the same period last year of Rp236.8 trillion. This is the impact of the policy of the Ministry of Industry (Kemenperin) which has initiated a 35 percent import substitution policy by 2022. This policy aims to improve the national trade balance, especially for raw materials and auxiliary materials which are the backbone of the national processing or manufacturing industry.

Meanwhile, for FDI, the realization in the manufacturing industry sector reached Rp260.3 trillion. The sub-sector that supports the most is the basic metal industry, metal goods, as well as non-machinery and equipment with investments reaching US$8.5 billion or contributing 25.3 percent of the total realization of FDI which is at Rp479.3 trillion.

Agus emphasized that the confidence of investors in this industrial sector must be maintained, which is supported by various strategic policies. But not only investment, the government also continues to encourage downstream industries that contribute significantly to state income through export taxes, royalties, non-tax state income (PNBP) and dividends.

Ignatius assessed that the application of industry 4.0 was not only about the use of information technology in order to support the improvement of developed technology and innovation, but also put forward the development of human resources through culture and work ethic which is expected to provide added value in an effort to increase global competitiveness.

In the current world situation that is hit by food, energy, and financial crises, all countries are competing for investment because investment can encourage increased value added, job creation, and increase foreign exchange. Therefore, the government focuses on creating a conducive business and investment climate by maintaining good economic and political stability in the country.

Various important development indicators continue to show improvement, and this indicates optimism for Indonesia to accelerate recovery and growth so that it is able to move towards an inclusive and sustainable economic transformation.

)* The author is an economic observer from FEB University of Indonesia