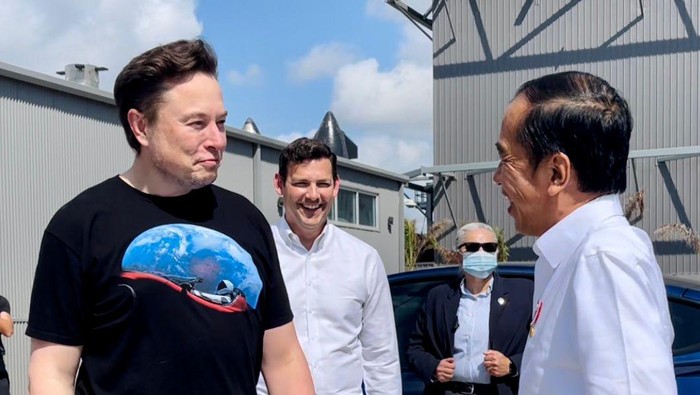 President Jokowi met with Tesla CEO Elon Musk, on May 14, 2022 at SpaceX headquarters, Boca Chica, United States. The meeting of these two important figures is believed to increase investment potential in Indonesia.

In order to make the country’s economy healthy, the government is intensifying investment in Indonesia. The trick is to make the Job Creation Omnibus Law which has an investment cluster. In addition, large-scale investors were also visited and invited to invest in Indonesia, including one of the richest people in the world who is also the owner of Tesla, Elon Musk.

Elon Musk met directly with President Jokowi on May 14, 2022 at his rocket factory, SpaceX headquarters, Boca Chica, United States. The hour-long meeting was intimate and Elon Musk welcomed President Jokowi. Elon looks relaxed in a black t-shirt and tries to be a good host.

Besides taking him around and explaining about SpaceX, Elon Musk also talked about investment and other topics with President Jokowi. President Jokowi stated that talks with Elon Musk revolved around investment, technology, innovation, and plans for future cooperation.

Indonesia has nickel mining materials that make Elon Musk interested in investing. Later, nickel will be processed into electric car batteries and support Tesla’s production as the world’s leading electric car manufacturer. The large supply of nickel is what makes Tesla willing to finalize plans for investment in Indonesia.

The public also appreciated President Jokowi’s meeting with Elon Musk because he met in person, instead of sending other ministers or delegates. This strategy worked, and Elon Musk was honored to meet with the President of Indonesia so that the government looks very serious when it comes to investment. In this way, in just a few months a foreign investment factory with Musk’s money will be built.

In addition, when holding a meeting, President Jokowi looked relaxed and did not rush to invite Elon Musk as an investor. But the way is with semi-formal meetings and lobbying slowly. Elon Musk is aware that being the richest person has a high position and he feels respected by President Jokowi.

Investment potential in Indonesia is indeed very high because in addition to having an abundant supply of nickel and other mining materials, its regulation is also facilitated, thanks to the Omnibus Law on Job Creation. This rule is what makes Elon Musk even more interested in investing in the nickel sector. It was different when he wanted to invest in India which was still hindered by many burdensome regulations.

The positive response was shown by the domestic community when President Jokowi met with Tesla CEO, Elon Musk. This indicates that Tesla will soon invest in Indonesia. With Elon Musk’s trust in Indonesia, it is hoped that Indonesia will gain wider investor confidence.