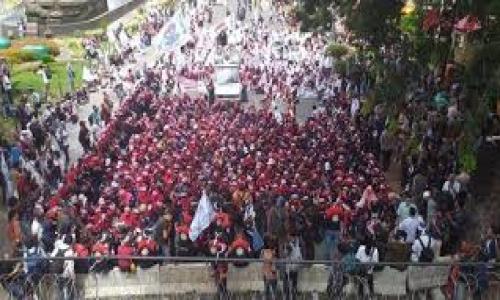 A labor demonstration will be held on 15 June 2022, the purpose of which is to oppose the revision of the PPP Law (Law Formation of Legislation). This action deserves to be rejected because the demonstration will increase the potential for an increase in Covid-19 cases, as has been happening in recent periods.

This labor demonstration was opposed by the public, because first, it was still a pandemic period, so it would not get permission from the Police. Moreover, Corona cases are on the rise lately, so demonstrations that gather people and create crowds are feared to create new Corona clusters. Don’t let the demonstrators go home and be exposed to the Covid-19 virus.

Second, the demonstration against the PPP Law violated the law because the law was already legal and was applied throughout Indonesia. If it is the labor cluster in question then this must be reconsidered. The labor element is also asked not to be influenced by the issue that its position will be shifted by TKA (foreign workers). However, the cluster stated that foreign workers do not work as low-level employees, but as operators, who will transfer knowledge.

Then, if the Employment Creation Law is enacted, the workers need not worry. The reason is because when they are laid off, they will still get severance pay. Don’t believe the hoax that says that because of the Job Creation Act, severance pay is abolished. Even though severance pay is their right and the amount has been regulated.

Meanwhile, the Deputy Chairperson of the Garuda Party, Teddy Gusnaidi, also rejected the labor demonstration on June 15, 2022. According to him, the way to oppose a law or bill is not through demonstrations. But by filing a claim to the Constitutional Court (MK).

Indonesia is a state of law and amendments to a law or bill are indeed through legal channels, for example through the Constitutional Court. If you do a little demonstration and ask for the law to be changed, it will not be in accordance with the procedures in this country. How can the workers think that after the demonstration, the law will automatically be changed quickly?

The demonstration on 15 June 2022 was strongly opposed by the community because it has the potential to create traffic jams, even though it was a working day and it was definitely busy, and traffic jams would disrupt the smooth flow of traffic. Workers were asked to cancel the action and channel their aspirations in a better way.

Anticipating the Increase in Covid-19 Cases