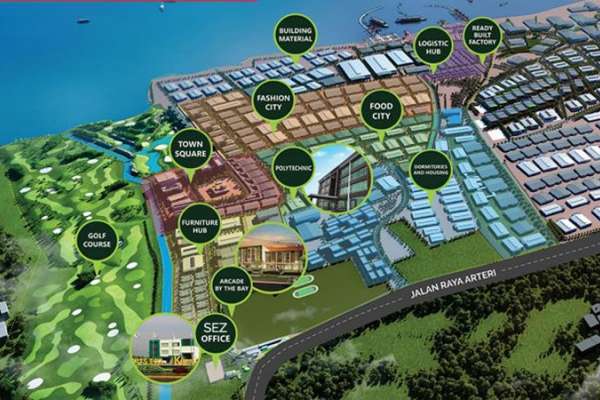 The Employment Copyright Act has brought various benefits, not only making it easier to set up a business, but also being able to optimize the formation of special economic zones (SEZs).

The Coordinating Ministry for Economic Affairs (Kemenko) noted that investment in Special Economic Zones had reached Rp 60 trillion after the creation of the Job Creation Law. This investment comes after the establishment of four new SEZs.

Expert staff for Regulation, Law Enforcement and Macroeconomic Resilience at the Coordinating Ministry for the Economy, Elen Setiadi, said that there was an increase in investment after the creation of the Job Creation Law. This means that the existence of the Act has had a positive impact.

Elen said that the increase in investment in SEZs since the Job Creation Law has recorded an investment of almost Rp 60 trillion. There are four new SEZs after the Job Creation Act. He detailed that the Gresik East Java SEZ has been filled by the groundbreaking of the smelter factory owned by PT Freeport Indonesia. Then there is the West Java Lido SEZ for tourism and the creative economy which is managed by PT MNC Land with a completion target by the end of this year.

Elen also revealed that the Nongsa (Batam) SEZ will be groundbreaking for the data center, an investment of around Rp 7 trillion. Then also (SEZ) Batam Aero Technic which is the MRO of the Lions and this continues and will develop with an additional 20 hectares of land. The government hopes that the investment generated through these four SEZs can reach Rp 90 trillion by 2024. In addition, the government will also look at other locations that are considered potential to become SEZs.

It should be noted that special economic zones have been regulated in Indonesia since 2009. SEZ is an area with certain boundaries that is included in a region or region to carry out economic functions and obtain certain facilities.

The government then reformed the SEZ through Law No. 11 of 2020 concerning Job Creation and Government Regulation No. 40 of 2021 concerning the implementation of Special Economic Zones, In accordance with the spirit of the establishment of the Job Creation Law, the government provides a series of facilities and conveniences to business actors who open their business fields in SEZs.

Head of Development Control and Management of SEZ Achievement Evaluation, Bambang Wijanarko, said that in SEZ the government gives freedom to business entities to choose the location and sector to be developed. After business actors build industries in SEZs, the government will provide various facilities and conveniences.

First is the expansion of business activities in which multi-sector coverage is expanded to the education and health sectors.

Second, the implementation procedure is clarified. In this case, the government simplifies the procedure for no longer tiered proposals, without eliminating support from local governments; the requirements for the proposal include, among other things, a minimum of 50% land tenure, additional proposals for more than one province and additional arrangements for the transformation of KPBPB into SEZ.

Third, the certainty of facilities and conveniences. The government simplifies licensing services and everything is carried out by the Administrator (customs self-service, fulfillment of commitments/completion of all permits at the administrator), local governments are obliged to provide support including local incentives; affirmation that the import of goods to the SEZ has not applied restrictions; additional fiscal facilities to provide certainty to investors such as the development of a nationally integrated electronic system to facilitate the provision of fiscal facilities, the provision of exemption from import duty, the provision of facilities that are not subject to PPN or PPN and PPnBM for Taxable Services and Intangible Taxable Goods.

Fourth, institutional improvement. The government establishes an Administrator by the National Council and financial management with a BLU pattern, as well as an Administrator based on professional qualifications, increases the status of the secretariat General of the National Council for the effectiveness of coordination and regulation of the Zone Council, which can be established for SEZs whose territory covers more than one province.

On the other hand, the approval of the suitability of government activities