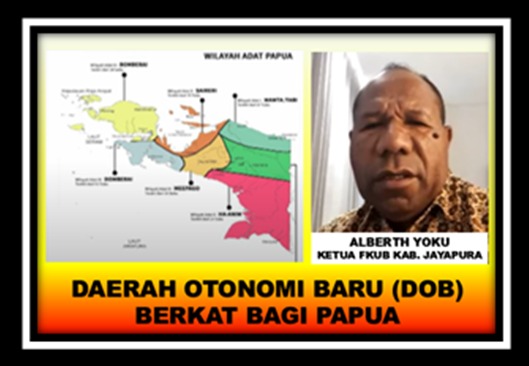 Papua, CIDISS.CO – The Head of the Papuan Religious Harmony Forum (FKUB) Alberth Yoku said the plan to realize the New Autonomous Region (DOB) of Papua would be a blessing and bring progress to the Earth of Cendrawasih. Development in Papua is believed to be growing faster and more evenly.

This was revealed by Alberth Yoku during an interview with Matoa TV (14/6/2022).

Alberth Yoku assesses that the purpose of realizing the New Autonomous Region (DOB) in Papua is good, but from the sentence or word the new autonomous region itself is still common to the Papuan people to understand, so miscommunication can occur because the sentence or word is not understood. Therefore, it is more appropriate to use the word “expansion” to make it more grounded and understood by the Papuan people.

From the explanation of the regional government with figures regarding the progress of physical facilities and infrastructure as well as the development of human resources and employment opportunities or labor absorption, it is stated that the expansion is very helpful so that this explanation will be conveyed by the people in Papua to be disseminated, said Alberth.

Meanwhile, if the expansion can be realized then the mobilization of the population must be protected. Indigenous people need to take time to adapt to the New Autonomous Region and their rights, both political rights and their rights to education and health, as well as the rights to become civil servants or members of the Indonesian National Police, must be realized as well, said the former head of the GKI in Papua.

Regional Heads, religious leaders, traditional leaders, women’s leaders and youth leaders in Papua agreed that the new autonomous region or expansion could occur by opening up opportunities for Papuan people or Orang Asli Papua (OAP) to serve the country through various development fields, said the Chair of the Jayapura Regency FKUB.

Be Wise in Responding to the Expansion of the Papua Region