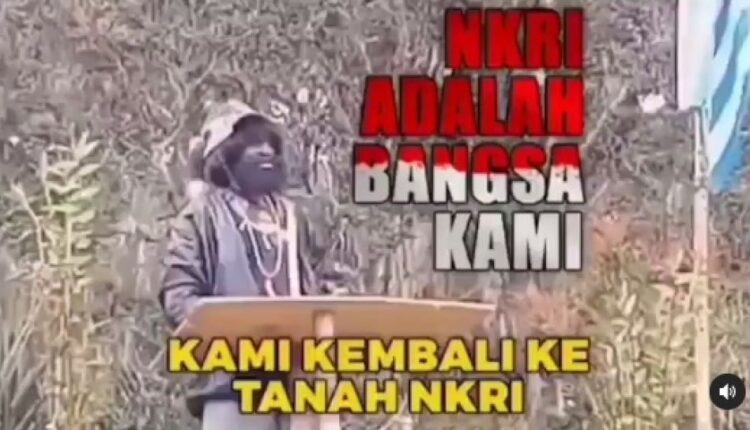 Appreciating the Return of OPM Leaders to the Republic of Indonesia

One of the top officials of the Free Papua Organization (OPM) in the Tabi region, Alex Ruyaweri Yessi Makabori, has vowed to be loyal to the Republic of Indonesia. The decision was deemed appropriate and received public appreciation for proving that separatism is a futile ideology.

The popularity of the OPM is a bit regrettable for coloring the Earth of Cendrawasih with black ink because they are often associated with Papua, even though they should have been eradicated so it is not synonymous with rebellion. The OPM still has ambitions for independence even though Papua is an official province in Indonesia.

However, the public need not worry because one by one the OPM members came to their senses and returned to their motherland. Alex Ruyaweri Yessi Makabori (70 years), Chief of Army Staff of the Papuan Liberation Army National Army which is affiliated with the OPM, surrendered and kissed the red and white flag as a sign of returning to the Republic of Indonesia.

The Head of Public Relations of the Papuan Police Kombes Musthofa Kamal stated, “The goods of the former TPN-PB were received directly by Ipda Dhanel Zeth Rumpaidus, Head of the General Criminal Unit of the Jayapura Police Criminal Investigation Unit.”

When many TPN-PB and OPM members return to the Republic of Indonesia, it is very good because they will disband by themselves. So, this is what the government wants, because later Papua will be peaceful without any terrorist and rebel organizations. Papua will be an area that is famous for its tourism, not because of its rebel groups.

The public should appreciate the return of OPM officials to the motherland’s lap because it is proof that when there are TPN-PB, OPM, or KST members who want to repent, they will not be harmed. In a sense, there will be no negative treatment. In fact, the authorities are happy when someone returns to the Unitary State of the Republic of Indonesia and will be given assistance in the form of work, so that they can earn halal money.

Alex’s return to the Republic of Indonesia is not the first time this has happened, in the sense that there have been many former members of the OPM, TPN-PB, or KST who have also repented. They realized their mistake and left the rebel organization. Then hand over illegal firearms and other dangerous goods owned.

We hope that more KST, OPM, or TPN-PB members will also return to the motherland. They will realize that all they have been fighting for is wrong, because it is futile to rebel for decades but to no avail.

Currently all members of OPM, TPN-PB, or KST should be able to see how advanced Papua is. There are already various infrastructures built by the government and Papua is no longer neglected. So that they will understand and in droves surrendered to the police.

The surrender procession from OPM officials was very moving because he willingly returned to the motherland’s lap. May this procession be the beginning of other members so that they repent and realize their mistakes. The community appreciates Alex’s return because his safety is guaranteed.