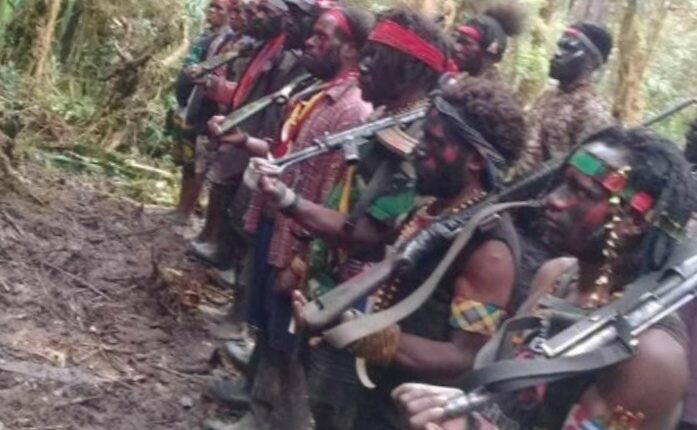 KST Papua is a Brutal Terrorist that Deserves Action

Enforcement of the Papuan separatist and terrorist group (KST) must be carried out because the group has caused trouble which has resulted in fatalities. Law enforcement against these groups is expected to stop acts of violence in Papua.

Mahfud MD as the Coordinating Minister for Law and Security (Menko Polhukam) Mahfud MD, said that dialogue efforts for peace in Papua had been made to many parties, but only KST showed an uncooperative attitude.

Mahfud MD said that law enforcement against KST must be carried out, because these gangs have damaged harmony in the midst of societal peace.

These words were at the same time Mahfud MD’s answer to an accusation from a church organization which stated that the government had never replied to a letter requesting dialogue related to resolving the Papuan conflict.

This was previously conveyed by the Coordinator of Justice, Peace and Integrity of Creation (KPKC) of the Synod of the Evangelical Christian Church (GKI) of the Land of Papua, Dora Balubun.

Responding to Dora’s statement, Mahfud said that the government had repeatedly conducted dialogue. Not only with church leaders, but also all elements of organizational institutions in Papua, such as indigenous peoples, DPRD, and the Papuan People’s Council (MRP).

Mahfud also emphasized that the government has committed that Papua is an integral part of the Unitary State of the Republic of Indonesia, both politically, constitutionally and in international law.

Mahfud, who once served as a Constitutional Court Judge, also said that the government remains true to its commitment to develop Papua in peace. Moreover, this has been written in Presidential Instruction (Inpres) Number 9 of 2020.

KST itself has a track record of causing riots, not only civilians who are victims, TNI-Polri officials are also victims of KST’s barbaric actions.

Of course, the pinning of the terrorist label for KST is not without foundation. Because Law Number 5 of 2018 states that a terrorist is anyone who plans, mobilizes and organizes terrorism.

Meanwhile, terrorism has the meaning of acts that use violence or threats of violence that create an atmosphere of terror or widespread fear that can cause mass casualties or cause damage or destruction to strategic vital objects, to the environment, public facilities or international facilities with ideological motives. , politics and security.

The existence of KST in Papua with all its evil actions so far has certainly created an endless sense of fear for local residents. It is not wrong for Papuans to become inflamed and express their jealousy towards their compatriots and fellow countrymen in other areas who are allowed to enjoy the dynamics of normal life without fear from the sudden attack from KST.

With atrocities that clearly violate human rights, of course the state is obliged to exist with a clear objective, namely to protect Papuans so that they can lead normal lives, without being overshadowed by terror and fear. When Papua returns to peace and conducive conditions without conflicts involving firearms, the government can calmly continue development on Cenderawasih Land

Fighting and liberating Papua from various terror and crimes against humanity by KST is a concrete manifestation for the state to protect the basic rights of the Papuan people.

KST did not stop voicing narratives to separate from the Republic of Indonesia, the group also justified any means such as rioting, burning public facilities to attacking security forces.

Meanwhile, AKBP Arif Irawan as Deputy Chair of the Cartenz Peace Operations Public Relations Task Force stated that his party was paying attention to the series of KST attacks in December 2022. Moreover, they had been determined to carry out attacks on the Yapen Islands where there had never been any shooting before. Currently the Carstensz Peace Task Force maintains public order and security, starting from the smallest environment.

KST members always throw accusations of spying to attack civilians. They also shot motorcycle taxi drivers because they were suspected of being police intelligence. However, these accusations could not be proven because the police denied them. They shoot other people indiscriminately, even though they are both Papuans.

The brutal acts of KST have made the Papuan people even more miserable, this is because the attacks from KST have stopped people’s activities. This shows that acts of terror in Papua can stop community activities such as buying and selling.

Papuan civil society definitely wants peace in Papua without the sound of bullets from KST’s weapons.

The security forces, both TNI and Polri, have the duty to eradicate KST with the aim that the Papuan people can live their lives safely without any terror.

KST who are still roaming in Papua need to get firm action, don’t let Papua become a red area because of the presence of separatist groups that can carry out brutal actions against civilians.

Ratification of the Criminal Code Does Not Contrary to Democracy