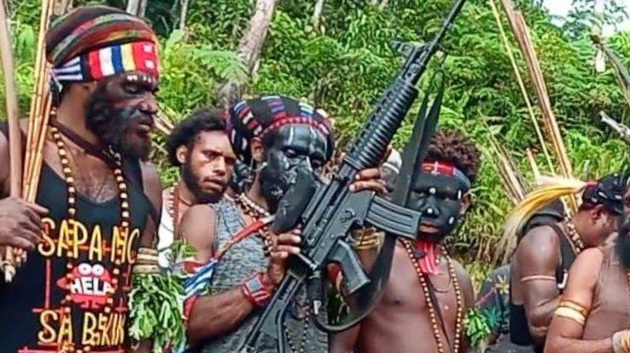 The Papuan Separatist and Terrorist Group (KST) is an armed group that always terrorizes the people and hinders various development programs. The sadistic and brutal action of KST Papua is also proven to disrupt the welfare approach that is currently being intensified by the Government to develop Papua.

What do you remember about Papua? So far, Bumi Cenderawasih has become a favorite spot for vacations, such as in Raja Ampat and the Jayawijaya Mountains. However, there are still those who think that Papua is synonymous with backwardness. Even though the government has maximized development for the welfare of the people there.

The welfare approach is being promoted because it replaces the old, spartan methods. It is hoped that with this approach, the community will be more prosperous. They will not want to be approached by separatist and terrorist groups aka KST, because the Indonesian government has provided many of the best facilities.

However, the welfare approach was fiercely opposed by KST. This separatist group always interferes with development projects. In fact, the result of this project is for the convenience of life and the welfare of the Papuan people, who are also their brothers and sisters.

One of the evidences that KST interferes with the smooth approach to welfare is the disruption during the construction of the Trans Papua road. There are several KST attacks that bother the employees who are building the project, so it’s quite a hassle. Finally there is extra protection from the security forces so that they are not afraid of KST carrying illegal firearms.

In fact, the Trans Papua road was intended to be built for the smooth mobility of the people on Earth of Cendrawasih so that travel would be faster. If there is a Trans Papua road, the delivery of goods can be via box cars instead of planes as usual. That way, the prices of basic necessities and other goods can go down because the transportation costs are low.

The reason for the disturbance from KST is that the trans-Papua road can expose the KST headquarters, because there is a new road opening and it could be that in the thick leaves there is a KST headquarters, so they can be caught. Even though they should be grateful because the Trans Papua road makes people’s lives easier and this is proof that the government built the Earth of Paradise, not colonizing it as they thought.

Another proof of the welfare approach is the construction of schools with adequate facilities, as well as high-quality teachers. However, KST acted arbitrarily by burning schools and even worse killing teachers. The teachers obviously couldn’t fight back because they were suddenly attacked so they couldn’t take weapons for protection.

Even though people’s lives can improve thanks to education and if schools are burned, then KST is the same as inviting the people to wallow in ignorance. They didn’t think long that if KST didn’t want to advance with education, people would easily be fooled.

Therefore KST must be disbanded now and its members arrested so as not to cause trouble in Papua. Don’t let them get in the way of development on the Cendrawasih Earth, because it’s tantamount to resisting progress. The people need modernity, not false promises of a new state.

From his behavior alone, KST’s maturity and level of leadership are in doubt, because he has often made wrong statements between his members in Papua and those abroad. They also only know that violence and so on are very dangerous if they become leaders, because they have the potential to become dictators.

The existence of KST is very disturbing, both security forces and civil society. KST must be disbanded and its members arrested so as not to cause chaos in Papua. Security in construction projects needs to be tightened so that there is no attack from KST.