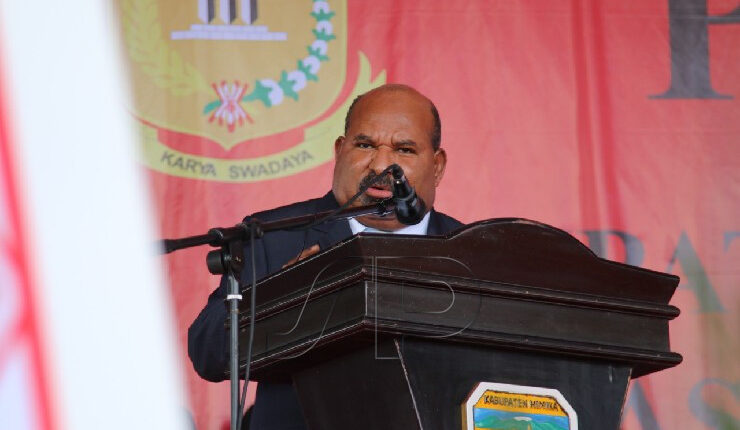 Lukas Enembe’s Corruption Resolution Must Use State Law, Not Customs

Papua Governor Lukas Enembe still evades the status of a suspect and has not obeyed the Corruption Eradication Commission (KPK) summons twice. Sadly, he claims to be the Chief of the Papuan Tribe and asks that his case be settled by customary law. Whereas customary law cannot be used for corruption cases, because it should use criminal law.

When Lukas Enembe was declared a suspect by the KPK, he did not immediately fly to Jakarta and undergo an examination. But still in Papua on the grounds of heart disease and stroke. Luke’s behavior angered the public because he pretended to be sick to seek sympathy, and they already knew his trick, because most suspects always claimed to be sick when they had to face examination.

Even more strangely, Lukas Enembe’s Legal Team requested that the case be resolved by customary law, because he is the Chief of the Papuan Tribe. Lukas’ request is still being added with assurances that the examination can be carried out in the open field and watched by many people, including indigenous Papuans.

The Head of the KPK News Section, Ali Fikri, stated that although the existence of customary law is recognized throughout Indonesia, for crimes (especially corruption), positive law applies nationally. If customary law uses moral sanctions, it still has no effect on positive law that applies in Indonesia.

Customary law is applied in certain cases, for example accidentally hitting an animal, or polluting a traditional house. If the community still upholds adat like Papuans, the punishment is a fine in the form of cash and livestock.

However, for corruption cases, of course, customary law cannot be used because there is no relationship between corruption and the destruction of the system of indigenous peoples. How could Lukas Enembe request that his case be settled by customary law, while his case is the theft of people’s money (sourced from the central government). These two things are completely irrelevant.

It could be that Lukas Enembe asked that his case be settled by customary law because for him, customary punishment is relatively lighter, because he only had to give some money and a few pigs. However, the value is certainly not comparable to the state money he corrupted, amounting to more than 500 billion rupiah. Therefore, his request was rejected outright by the KPK.

Ali Fikri added that his party regretted the statement of Luke’s attorney which was counterproductive, because it would injure the noble values ​​of the Papuan people. Papuan traditional leaders still hold noble values, including honesty and anti-corruption.

In a sense, if Lukas Enembe insists on using customary law, there will be traditional elders who will try him and warn that not every case can be resolved by customary law. Especially when Lukas is involved in a corruption case and shows his dishonesty. As an official, he should have been ashamed and resigned, because he was proven to have stolen state money.

The traditional elders are also angry because Lukas Enembe has tarnished the name of the Papuan people, and don’t let Papua be synonymous with the name of the place where the corruptors are. He should have repented and admitted his mistake and then came to fulfill the KPK’s summons. Instead of hiding and humiliating the people on Earth of Cendrawasih.

Meanwhile, the MAKI (Indonesian Anti-Corruption Society) Coordinator, Boyamin Saiman, stated that corruption cases could not be resolved by customary law. This is not related to his (fake) status as the Chief of the Papuan Tribe, then being tried according to custom. However, it is related to the Criminal Code and the case is purely corruption.

Lukas was also advised to obey the KPK’s orders and come to the location that was used as a place of examination (namely at the KPK’s Red and White Building). So that his request to ask for an examination with customary law and be carried out in the open field (in Papua) must be rejected outright.

The community wanted Lukas Enembe to act manly, and come to fulfill the KPK’s call. Instead of creating a sensation by claiming himself as the Chief of the Papuan Tribe and asking for an examination with customary law. If he evades and continues to make excuses, it will further show that he is guilty and of corruption of state money.

If each corruption case is resolved by customary law, it will violate procedures and foster corruption in Indonesia. The reason is because when there are other corruptors, they will ask for procedures with customary law, such as Lukas Enembe. Even though this is a big mistake and can destroy the country, because each official is not afraid to commit corruption, because the reward is lighter (only in the form of a fine).