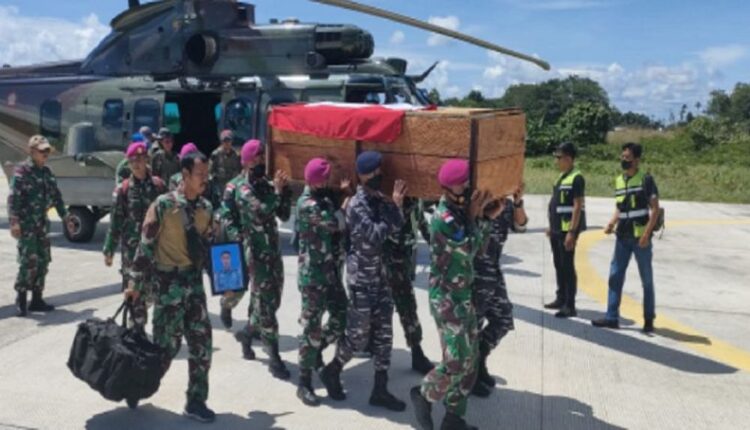 The Papuan Separatist and Terrorist Group (KST) has again carried out a brutal action that deeply hurt the hearts of Papuans. Previously, KST Papua carried out an attack on members of Brimob Papua on Saturday, June 18, 2022 in Napua, Jayawijaya Regency, Papua Province.

Bripda Diego Rumaropen is a Papuan native of Brimob Yon D Wamena. Bripda Diego became a victim of the attack carried out by KST Papua. The incident began when Bripda Diego was accompanying the Danki Brimob AKP Rustam to help residents shoot their cows in Napua. After shooting a cow and going to check on the cow that had been shot, AKP Rustam entrusted the weapon he was carrying to Brigadier Diego Diego.

When Brigadier Diego was alone at the location, two KST members came with machetes and slashed at Brigadier Diego’s body, took two firearms, and fled from the scene. The deceased died from a stab wound to the chest, after previously being taken to the Wamena hospital.

Direskrimsus Polda Papua Kombes Police Faizal Rahmadani in his press statement stated that six people had been questioned regarding the case. Kombes Faizal added that the two organic Polri firearms that the perpetrators took away were AK101, and SSG08 (sniper).

KST Papua spokesman, Sebby Sambom said his party was responsible for the incident that befell Bripda Diego. This is part of Operation KST Troops in accordance with the Declaration of the 2017 Stages of the Revolutionary War in Yambi, Puncak Jaya Regency, Papua. The reason KST attacked Brigadier Diego was to take his guns because they needed guns. KST argued that it wanted to save three million Papuan Indigenous People (OAP) even though it had to sacrifice Papuans themselves.

KST’s claim that it wants to save three million OAP is nonsense. How could they possibly save lives, if they were the masterminds of the violence. Moreover, this act of terror also poses a threat to the citizens of the community. People feel unsafe to carry out daily activities.

This brutal act by KST is not the first time this has happened. Previously, in January 2022, Sergeant (posthumously) Miskael Rumbiak died in a gun battle with KST in East Aifat District, Maybrat Regency, West Papua. Sertu Miskael is a Papuan son who is a soldier in the Indonesian Army. At the time of the incident, the deceased was working to build two bridges for the benefit of the community.

According to the head of the Biak Tribe, Mananwir Hengky Korwa, the brutal incident that befell indigenous Papuan security officers is not part of OAP culture. It is unfortunate that the terror perpetrated by KST has clearly hindered development on Cenderawasih Earth.

In line with Mananwir, Samuel Kambuaya as the Maybrat indigenous community at the West Papuan People’s Assembly Cultural Institute (MPRB) said that the heinous killings targeted posts belonging to the security forces, not Maybrat’s indigenous culture. He asked the violence that eats the soul to stop. He wants the area to be as safe as it used to be.

Hopefully in the future brutal acts like this will not happen again. The author hopes that the TNI-Polri, and all elements of society can unite to maintain security in the Land of Papua. We long for a safe Papua, a developed Papua, a prosperous Papua without terror from KST. Hopefully that time will come true soon.

)* The author is a Papuan Observer, a former journalist for local media in Papua.

Terrorism Expert: Collaboration between BNPT, Ministry of Trade, and Ministry of Education and Culture Able to Prevent Radicalism

Beware of Hoaxes The UN Komnas HAM Will Visit Papua