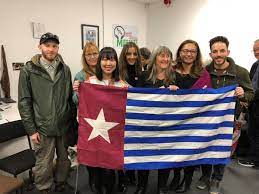 Indonesia’s sovereignty over Papua is final because it is in accordance with existing laws. Therefore, the community rejects foreign interference in the Papua issue, which is a domestic problem in Indonesia.

In international relations, Indonesia has always been respected by other countries. Indonesia’s position is strategic and trusted to host the G20 Summit (KTT) to the Inter Parliement Union (IPU) meeting. However, even though the government is trying to build good relations with other countries, there are some who interfere in Indonesia’s internal affairs, especially Papua.

The riots in Papua are not only created by separatist and terrorist groups (KST). But also by intervention from other countries. There are those who take advantage of the news that spreads from Papua to be ‘fried’ to the international community and they distort the truth.

Whereas for internal affairs such as Papua, foreign parties should not interfere. The reason is because they violate international law. But they still do it because they feel good.

One of the countries that actively corners Indonesia in Papuan affairs is Vanuatu. This small country in the pacific islands often mentions the issue of Human Rights (HAM) and supports Papuan independence. In fact, most of the information conveyed by Vanuatu is a hoax because the Indonesian government is trying its best to promote Papua, including the Papuan Orang Asli (OAP).

If Vanuatu or other foreign parties have an issue with human rights violations in Papua then it should not be looked at by case but must be done as a whole. It cannot be said that there was a violation of human rights when there were arrests of members of the Papuan Separatist and Terrorist Group (KST), because they had disturbed the community. In fact, KST violated the human rights of civilians because they repeatedly attacked and killed.

It’s strange when foreigners want Papuan independence and praise KST, even though they always commit crimes. Don’t even defend criminals because the world will be in chaos.

To prevent foreign interference in the Papua issue, Indonesia continues to assure the United Nations that there are no human rights issues on the Earth of Cendrawasih. UN officials also believe that Indonesia has credibility and is unlikely to commit human rights violations, both in Papua and in other regions.

In addition, interference can be prevented by direct reprimand to the government. For example, if a foreign newspaper reports something wrong about Indonesia, the Ministry of Foreign Affairs can immediately summon its ambassador in Indonesia.

When there is news about Papua that is not true, Indonesian netizens can also directly protest in the comments column, both on social media and on the newspaper’s website. They must be reminded not to be presumptuous and interfere in the internal affairs of this country.