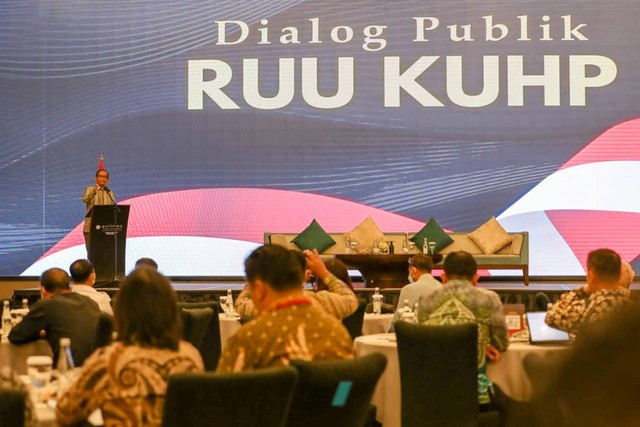 The Draft Criminal Code (RKUHP) needs to be re-socialized to the public considering that the draft has actually been compiled since the 2014-2019 period. On the other hand, the RKUHP also contains reforms in its criminal law which are an effort to harmonize laws and regulations with legal principles and values ​​that develop in Indonesian society.

Students at a number of universities in the Special Region of Yogyakarta (DIY) were asked for their roles by the Regional Office of the Ministry of Law and Human Rights (Kanwil Kemenkumham DIY), to socialize the RKUHP.

In front of the students, the Regional Office of the Kemenkumham DIY explained 14 crucial issues that became the public’s attention in the process of ratifying the RKUHP. Imam said, “This is also a follow-up to the Menkumham’s direction so that the public can better understand the substance and get the same opportunity to provide input on the draft or draft of the Criminal Code.

Imam also said that the RKUHP has actually been compiled since the 2014-2019 period with an inventory list of more than 6,000 problems, originating from various non-governmental organizations, public and private universities as a form of public involvement.

According to Imam, the completion of the discussion of the RKUHP is currently in the DPR RI and is in the process of hearing. Imam explained that in the RKUHP there were reforms in criminal law as part of efforts to harmonize legislation with legal principles and values ​​that developed in Indonesian society.

In the context of the RKUHP, Imam said that reforms in criminal law were also interpreted as part of efforts to harmonize laws and regulations with legal principles and values ​​that developed in Indonesian society.

He said that the RKUHP was also made in an effort to overcome “over crowding” with the existence of rules regarding the imposition of criminal supervision for violations of criminal law with a threat of under five years. In addition, there is also no over-criminalization, because the number of criminal acts regulated in the RKUHP is less than the Criminal Code.

The Head of the Administration Division who is also the Acting Head of the Legal Services and Human Rights Division of the Regional Office of the Ministry of Law and Human Rights, DIY Mutia Farida, explained that the socialization activities were aimed at minimizing cons and achieving a common understanding and improvement of the RKUHP.

This activity is also intended to realize the role of the Regional Office of the Ministry of Law and Human Rights of DIY in order to seek input from various elements and community institutions related to the RKUHP.

Thus, it is hoped that the problem of overcapacity of prisons at this time can also be resolved, taking into account that all criminal acts do not always end up in prisons because of some of these arrangements.

The RKUHP itself is a fundamental rule that will become an important foundation in regulating people’s lives in the future. These rules are formulated to protect and guide people’s behavior to determine what is good and can be done and what is not. Issues related to the RKUHP have also been explained to the public in order to avoid misperceptions. The public can also access it on the website regulations.go.id.

Presidential Special Staff for Legal Affairs, Dini Purwono, said that the RKUHP which will be ratified in the future can answer the challenges and legal needs in society, both now and in the future. The Criminal Code Bill is also an effort to bring criminal law in Indonesia to modern law and reflect the nation’s original values.

The government will also continue to ensure that the codification of criminal law through the Draft Criminal Code will be born as an effort with all components of the nation to bring legal certainty in Indonesia.

Therefore, the discussion of crucial issues of the Draft Criminal Code is expected to provide a deeper understanding and absorb public aspirations more effectively as part of a series of processes for the formation of the Criminal Code Bill.

Moreover, among the 600 articles in the RKUHP, various provisions and breakthroughs that are rarely heard and in principle can be used as references in interpreting Indonesia as a civilized nation and upholding justice and human rights.