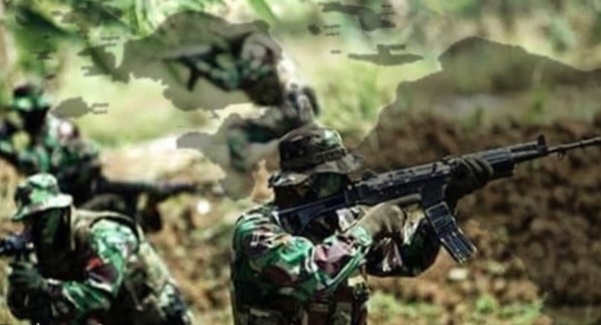 The Papuan Separatist and Terrorist Group (KST) again carried out a heinous act by shooting dead a motorcycle taxi driver on April 12, 2022, in Puncak Papua Regency. The community supports the TNI/Polri to take firm action against the Papuan KST group so that there are no more casualties.

We can no longer tolerate KST Papua regarding the actions of those who tend to do damage and also spread terror or fear to the general public. Recently, there was another act of terrorism when they shot two motorcycle taxi drivers in Puncak Jaya, Papua.

As a result of this incident, Kombes Ahmad Musthofa Kamal as the Head of Public Relations of the Papua Police reported that one person died and the other was in a critical condition. Furthermore, according to information provided by the police, the victim who died had a gunshot wound to his right rib, while the critical victim had a gunshot wound to the head.

Regarding the victims who suffered critical injuries themselves, for now, the Mulia Hospital has handled them and is being treated further, then the victims who died are still waiting for the decision of the family whether the bodies will be flown to their hometowns or just buried in Puncak Jaya. Kombes Ahmad Musthofa continued by explaining the chronology of the shooting.

He said that the two civilians who worked as motorcycle taxi drivers were passing by after they took their passengers. Suddenly the two of them were dismissed by an unknown person. However, the police are still investigating this case. Of course, with the existence of these separatist and terrorist groups, not a few among the people feel threatened and afraid because they continue to spread threats.

Therefore, it is very necessary for the state security apparatus of the TNI/Polri to immediately take very firm action against various forms or efforts of separatist and terrorist groups like this. The reason is that if left unchecked, it will certainly damage the unity and integrity of the Unitary State of the Republic of Indonesia, besides that it will also threaten the stability of state security.

There have been so many cases involving the Papuan KKB and it cannot be denied that they have tarnished humanity’s sense. Of course, various kinds of separatist practices and terrorism cannot be tolerated and must be strongly condemned. Therefore, the presence of the state here is very necessary to immediately arrest and thoroughly investigate various kinds of similar cases.

In addition, the state, through its security apparatus, has tried its best to get support from all levels of society. They have tried to maintain the stability of national security, starting from prevention efforts to various kinds of firm actions that they have taken for violators and destroyers of the integrity of the Unitary Republic of Indonesia.

Do not let any party capable of destroying and dividing the Republic of Indonesia. Because we must continue to echo the spirit of unity, which is the noble ideal of the founding fathers of the nation. Although we are all different, but we must be able to remain united and establish harmony among citizens. It is clear that if there is any attempt that has the potential to disrupt this harmony, it cannot be justified.

The cruel action of KST Papua must be stopped because it is beyond reason and tore apart human values. Law enforcement must be carried out maximally indiscriminately, including by bringing KST Papua to court for having committed serious criminal violations that caused casualties. Law enforcement is absolutely necessary so that similar incidents do not happen again.

The Practicality of Investing in Indonesia Can Attract Foreign Investors