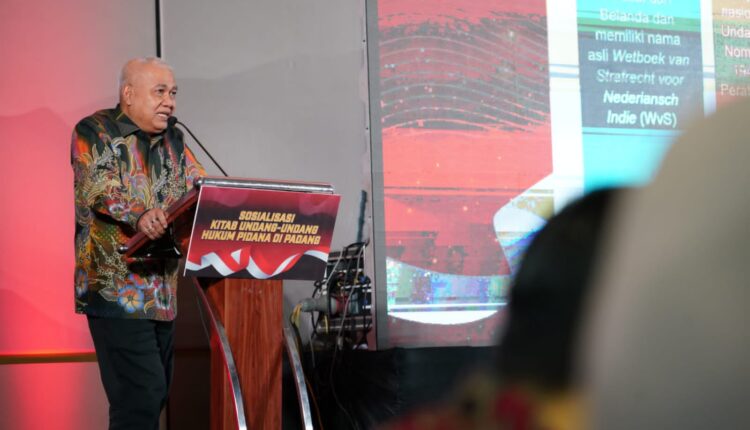 Socialization of the Criminal Code (KUHP) continues to be carried out as a form of preparation for law enforcement as well as providing understanding to the public. The Indonesian Criminal Law and Criminology Society (Mahupiki) again carried out this activity at the Santika Premiere Hotel, Padang.

In his remarks, Professor of the Faculty of Law (FH) Semarang State University (UNNES), Prof. Benny Riyanto said that the new Criminal Code is a joint legacy as a cross-generational legal product. Therefore it is hoped that all parties can work together to succeed in the socialization of the Criminal Code, especially during the transitional period because the Criminal Code will only be enforced in the next three years.

This is in accordance with the statement of the Chancellor of Andalas University (UNAND), Prof. Dr. Yuliandri also said that the Criminal Code was in accordance with the changes and conditions of the times, this legal product was prepared to anticipate the criminal law system so that it would be more adaptive to modern developments.

The momentum for a reform of the national criminal law system has occurred thanks to the birth of the National Criminal Code. It contains a lot of things that are in accordance with the unique values ​​of the nation’s culture and reflect the state philosophy, namely Pancasila.

The birth of the National Criminal Code which has been ratified by the People’s Legislative Assembly of the Republic of Indonesia (DPR RI) is considered a major effort by this nation to be able to completely abandon legal products made in the Dutch colonial era.

This is of course a decolonization effort, because in the end the Indonesian nation can truly be free from all colonial shadows since it was previously colonized before independence. Thus, making this nation itself not only experience independence from physical colonization, but also truly be independent and even be able to formulate its own legal system to implement.

Of course, this also indicates that now the Indonesian nation is a strong and independent country, without the need for intervention from any outside party, especially regarding the determination of the legal system that applies in the country. The existence of the National Criminal Code indicates that Indonesia has independently and sovereignly held its own legal system.

Besides that Prof. Benny Riyanto also said that the ratification of the legal system which was originally made by the nation’s children also made the entire criminal law process in Indonesia lead to a legal paradigm that was far more modern and was also able to reflect how the original values ​​contained in this nation.

The reason is, the modernization of the paradigm of criminal law is something that must be done because it aims to be able to answer all problems, especially those related to criminal law acts in an era that has experienced various developments as it is today.

It is very clear that if, for example, Indonesia continues to use the old Dutch-made Criminal Code to be implemented in the country, then this cannot be enforced anymore because in fact it is very outdated and has a lot of irrelevance in it.

Therefore, Prof. Benny Riyanto considers that the National Criminal Code is a form of inheritance that is very important for the sustainability of the legal system in Indonesia. Based on the modernization that has been carried out and in it has accommodated many of the original values ​​of the nation.

Related to the existence of original values ​​typical of the Indonesian nation, it is indeed a very crucial thing to be included in a legal system. The reason is, even though the old Dutch-made Criminal Code had undergone a naturalization process, the old legal system was still not based on national cultural values, the main thing being that there was absolutely no protection for the basic philosophy of the state, namely Pancasila.

So, with all the paradigm shifts that have taken place in the National Criminal Code, Prof. Benny reiterated that it is very important to have the latest legal system and also underlined that it is absolutely impossible for the Indonesian people to continue to use the old Dutch-made Criminal Code because it contains is no longer able to continue to accommodate the needs of criminal law today.

Prof. Benny Riyanto explained that if you look at the age of the initial issuance of the old Dutch-made Criminal Code which was more than 100 years ago, it is certainly very clear that the legal system is completely unable to keep up with the current developments in the nation’s norms and culture.

In addition, the Dutch legal system has absolutely no clear legal certainty because it basically uses the original Dutch language, which has no official translation in Indonesia and instead allows multiple interpretations to occur.

Professor of Law, University of Indonesia (UI), Prof. Dr. Harkristuti Harkisnowo also explained that the existence of the National Criminal Code was a form of the Government of Indonesia’s efforts to create an original legal system made by the nation’s own children based on the unique values ​​of the country. The existence of the National Criminal Code is a concrete manifestation of efforts to reform the national criminal law system as a whole.

Thanks to the birth of the National Criminal Code which was approved by the DPR RI, it is clear that it is able to create the best momentum for this nation to immediately reform the national criminal law system by replacing the enforcement of the old Dutch-made Criminal Code which is completely inconsistent with typical values. nation and does not contain Pancasila.

Absalom Yarisetouw: KST Papua Must Be Followed Firmly So that Papua is Safe and Development Runs Smoothly