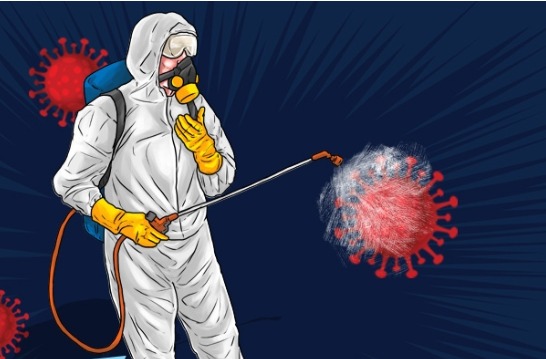 By: Afrizal) *
Government policies in dealing with corona such as health protocols can be 100% successful, if supported by the mass media. Their role is very important because they provide positive news about the handling of the Covid-19 virus in Indonesia. They are spreading good things, not corona hoaxes.
During a pandemic, the public can be affected by the news narratives read in the mass media. If there are newspapers that carry positive news about government programs, they will be happy and excited to comply with health protocols. The role of the mass media is very important because they have millions of readers and trust the content of the news that is published.
Bandar Lampung Mayor Herman HN asked the mass media and journalists to prioritize the truth, when writing news about corona. Because there are still people who don’t really understand about the covid-19 virus and its handling. In that sense, don’t let the news be “fried” and the contents twisted.
The mass media should publish positive news about the decrease in the number of corona patients, how to carry out self-quarantine, information about the location of the closest covid handling task force headquarters, and others. Don’t even accuse the government of being incompetent in handling a pandemic, just because they are opposing in politics. Remember that the media must be neutral.
The truth of news about corona is very important because if it is wrong, it will be fatal. For example, when it is reported that the Covid-19 virus can disappear when humans consume herbal drinks. Even though the truth is that these substances only strengthen immunity and cannot treat corona. All mass media, both printed and electronic, should not participate in hoax news.
But unfortunately there are mass media who are naughty and even spread hoaxes, instead of government policies in dealing with corona. They may slip because they don’t know that the news that is being published is fake, or they deliberately post it in order to reach a large audience. The second method is really sneaky because it can lead many people and thwart government policies.
It is undeniable that currently the news with the title click bait makes netizens more curious about its content. Even though most article models like that do not connect the title and content. If such hoaxes have spread, it can be dangerous for the community, because they believe in something wrong.
Hoaxes can also make government programs in building public health fail miserably. From the beginning of the pandemic, people were invited to adhere to health protocols. However, because of hoaxes, they are lazy to wear masks, because they feel they have enough face shields. Even though the tool was not effective in holding back the droplet rate that could transmit the corona.
So, the mass media must sort if they want to publish news, especially those adapted from foreign magazines. Check the truth first and don’t just translate then copy and paste. Currently checking for hoaxes is very easy and it remains only to check them on several sites. Don’t get caught up in hoaxes and spread them, because they can lead to fatal mistakes and sins of Jariyah.
The public is also asked to be alert and check the truth of a story. If something is odd, just check if it’s a hoax or not. Checking it takes only a few minutes. It is better to check than to have spread hoaxes and make other people lose, because they are consumed by news narratives that turn out to be fake.
The support of the mass media for the success of government programs is very important because they spread the word to the public. The government will find it helpful because it is supported by all mass media, both print and electronic, so that the handling of corona can be carried out quickly. When everything is in order, the number of patients will decrease and the pandemic can end quickly.

) * The author is a citizen, active in literacy forums in Kebumen

A number of political figures, celebrities urge to implement the Prokes after the simultaneous regional elections and ahead of year-end celebrations