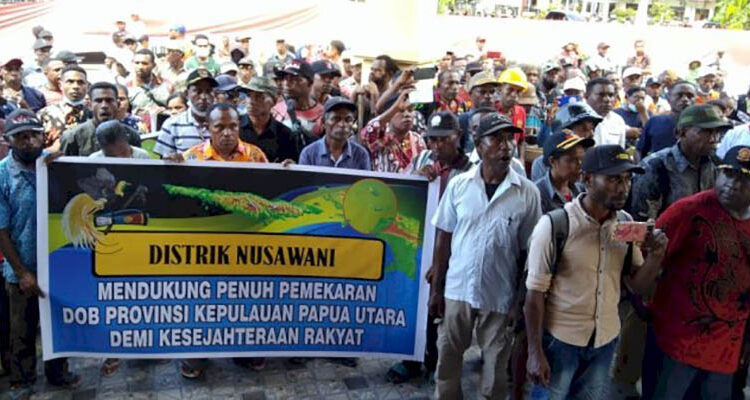 All elements of the Papuan Community support the ratification of the New Autonomous Region (DOB) in Papua. This support came from various groups, from traditional leaders, government officials, academics, students, to community leaders in Papua.

The Acting Governor of West Papua, Paulus Waterpauw, sent the West Papuan People’s Declaration Document containing support for the Special Autonomy (Otsus) policy and the establishment of a new autonomous region in Papua to President Joko Widodo in Jakarta. Waterpauw said the declaration of support for Otsus and DOB was an agreement between the regents, mayors, Forkopimda, religious leaders, traditional leaders, youth leaders, women leaders, and the people of West Papua.

This support from various backgrounds is a unanimous attitude and commitment from the people in West Papua who want expansion in the form of new autonomous regions and special autonomy. It should also be noted that this declaration of support was read before the Regents/Mayors Working Meeting for West Papua Province on June 14, 2022 at the PKK Building, Arfai, and was attended by a number of members of the Papuan People’s Council (MRP).

DOB and Otsus are held on the basis of Number 2 of 2021 which is the second amendment to Law No. 21 of 2001 concerning Special Autonomy for the Province of Papua. This regulation was born with the consideration to protect the dignity, as well as to give affirmation to the Papuan People (OAP). This regulation also serves as the legal basis for accelerating welfare development and improving the quality of public services in the Papua region.

The implementation of DOB and Otsus in Papua is a form of giving trust from the Central Government to the Regional Government in Papua to regulate and manage the interests of the local community according to their own initiatives. The implementation will be in order to get maximum results adjusted based on the aspirations and basic rights of the Papuan people.

This declaration of support for the implementation of new autonomous regions and special autonomy is one of the results of the Plenary Working Meeting of Regents and Mayors throughout West Papua. The Working Meeting is a forum for consolidating government and regional autonomy in order to realize a clean, effective and responsible government.

This declaration itself was signed by the Regents of Maybrat, Teluk Wondama, Manokwari, Kaimana, Deputy Regents of South Sorong, and PJ Regent of Tambrauw. Then this declaration was also signed by the Chair of the West Papua People’s Assembly, the Chancellor of the University of Papua, Community Leaders, Intellectual Leaders, Youth Leaders, Women Leaders, to Religious Leaders.

This support for the implementation of Otsus and DOB is not the first time, previously hundreds of Papuan students who were members of the Papuan Student Conference held a peaceful demonstration in front of the DPR/MPR RI Building and the Ministry of Home Affairs on May 31, 2022. They expressed their aspirations for the new DOB Bill to be immediately implemented. ratified, in order to create accelerated development for all Papuan people. These students also fully support the implementation of Otsus in Papua.

)* The author is a Papuan Observer, a former journalist for local media in Papua