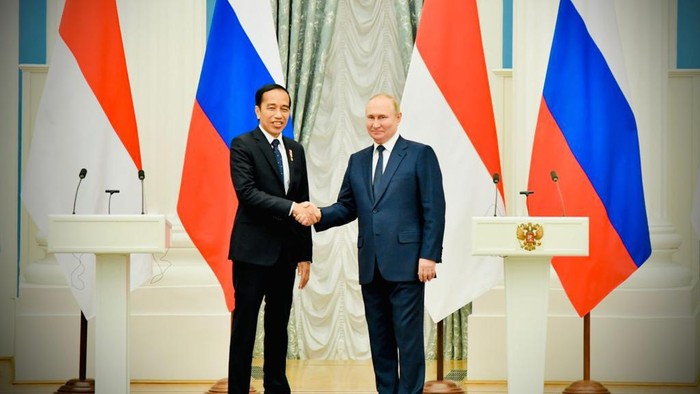 Indonesian President Jokowi reported that Russian President Vladimir Putin agreed to reopen the wheat export faucet that had previously been blocked. The success of this diplomacy deserves wide appreciation as a reflection of Indonesia’s leadership which is recognized at the international level.

In the midst of the ongoing conflict between Russia and Ukraine, President Joko Widodo as the President of Indonesia immediately scheduled a meeting with the leaders of the two countries. Later the plan was not just a figment, Jokowi managed to meet with the President of Russia, Vladimir Putin on Thursday (30/6) yesterday.

At the meeting, the two heads of state discussed many things, one of which was about efforts to deal with the threat of a global food crisis that is currently haunting as a result of the Russia-Ukraine conflict. The discussion regarding the opening of the sea route to carry out Ukrainian wheat export activities was apparently approved by President Putin.

Not only agreeing to the opening of the sea route, but according to a press conference held by President Jokowi at the Kremlin, he said that Putin would also provide security guarantees for the supply of food and fertilizers that could be exported from the territory of Ukraine and Russia itself.

The step taken by the former governor of DKI Jakarta to ensure the availability of commodity supply chains is to unite the export results of food and fertilizer from the two countries that are at odds, namely Russia and Ukraine into one global supply chain, including Jokowi will open a sea route for the benefit of the people. grain shipments from Ukraine.

The idea was first conceived by the United Nations (UN) and is also reported to have held direct talks with the two countries and talked to Turkey to quickly execute the idea. But so far it is the 7th President of the Republic of Indonesia who has taken immediate action and is working in real terms.

President Jokowi also added that food and fertilizers are very essential in this era of inflationary threats as they are related to humanitarian issues and involve impacts on hundreds of millions of other people whose food supply is disrupted, especially those who live in developing countries even though there is absolutely no connection. with conflict.

As reported by Nikei Asia, Putin immediately responded to a request issued by the Indonesian President regarding the fulfillment of food and fertilizer materials. Putin said that his country would be ready to fully meet the demands related to agricultural production proposed by Indonesia including the fulfillment of nitrogen, phosphate, potassium fertilizer and other production raw materials.

President Joko Widodo himself has also emphasized that the world’s supply of food and fertilizer is being seriously disrupted and has an impact on 2 billion people in developing countries who will be threatened with a crisis. Therefore, he urged all members of the G-7 to speak up so that food and fertilizers are not involved in the conflict between Russia and Ukraine so that the balance of world supply is maintained.

It is known previously, during the prolonged conflict, Russia carried out a blockade on the Black Sea to limit and even prevent the flow of exports from Ukraine with the aim of hampering the country’s economic growth as a result, wheat exports were directly disrupted in the world.

After the meeting, the Russian military was seen coming out of the Black Sea region which had previously been blockaded and admitted that this was a goodwill gesture that they had done, although on the other hand there were claims from Ukraine that the military had abandoned their blockade because it was successfully driven out with artillery bombs. .

Ukrainian President Volodymyr Zelensky himself also expressed his appreciation for the bold action of the Indonesian leader because he was the first Asian country to dare to make a visit in the midst of the Russia-Ukraine conflict. In addition, Indonesia’s position in the international arena is very high because it is the G-20 presidency and continues to promote world peace.

The success that has been sought by President Jokowi by visiting the two conflict countries directly and being able to persuade Vladimir Putin to change his mind is concrete evidence of the success of Indonesia’s international diplomacy. The arrival of President Jokowi is expected to be able to end the conflict between the two warring countries, the threat of a global food crisis can be avoided.

)* The author is an observer of international relations

Fighting Radicalism in the Digital Age