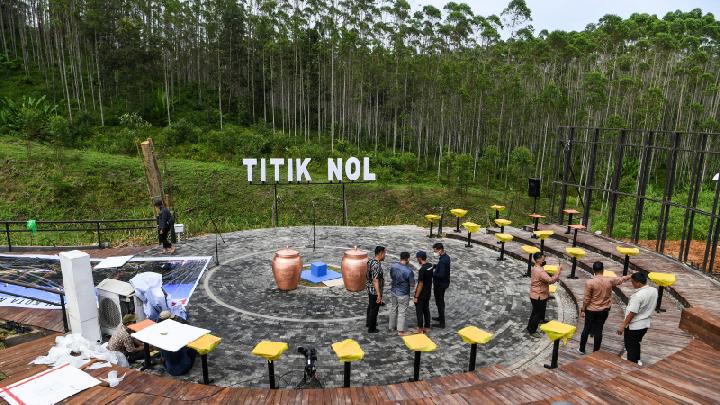 IKN Nusantara Has Many Green Areas

The IKN Nusantara area is confirmed to have a green area of ​​70 percent of the Central Government Core Area (KIPP). This was revealed by Valin Tsarina as URBAN+ Associate Urban Designer who said that the remaining 30 percent of the area would be used for infrastructure development.

As is known, the KIPP at IKN Nusantara will be built based on the Nagara Rimba Nusa design concept designed by URBAN+ where the concept will apply the Green Jemari concept which will maintain 70 percent of the green area. The URBAN+ architect team tried to conceptualize a city that represents the cosmology of the archipelago which consists of three parts, namely noble values, humans and nature. The noble values ​​themselves are usually in the hills, then humans are represented through cities and nature is represented as mangrove ecoparks.

Based on the latest information that the author got, the development process carried out will follow the contours and spatial structure of East Kalimantan which tends to be hilly. In the concept of urban development, the concept of bio-mimicry from Kalimantan’s forests will be applied to buildings. All buildings must be formed in harmony with nature and local vegetation must be maintained by minimizing vegetation intervention. Such as the arrangement of vertical buildings that still maintain the presence of vegetation and water flow like a tropical forest.

Valin said that the concept of a forest canopy that can provide a cool and shady feeling can also be adapted in building design and in the Central Government Core Area (KIPP) transportation networks will also be built that can reach 80 percent of the area. It should be noted that Nagara Rimba Nusa itself is one of nine cities in IKN Nusantara. Later the government area will stand on an area of ​​6,671 hectares.

However, the authors find that there are four main challenges that must be faced in ensuring the quality of the development of the Capital of the Archipelago (IKN) which was expressed by Takehiro Yasio as the Chief Representative of JICA when he met with the Minister of PUPR, Basuki Hadimuljono at the Ministry of PUPR office.

First, there needs to be integration based on basic conditions where all designs and developments must be based on current topographic and geological conditions. Such as making land grading and all infrastructure plans must refer to drainage plans to prevent flood disasters.

Second, there is a need for coordination of underground infrastructure, one of which is securing the right-of-way (ROW) area, especially for ditches and larger structures, namely sewer lift pumps.

Third, it must prepare space to ensure the accessibility of future expansion including the need for land for public transportation services such as bus stops and road utilities such as lights and CCTV.

Fourth, regarding the quality assurance of construction that must be built as well as possible so that unwanted things do not happen.

According to the author, the four challenges that must be faced have been precisely predicted by Takehiro so that in the future there will be no problems that arise due to lack of preparation for problems that can be faced in the process of developing IKN Nusantara.

In line with the author, Minister Basuki appreciated the results of the study conducted by the JICA consultant team, especially related to the first challenge, the JICA consultant was very observant in observing because the construction of the Nusantara IKN would depend on the drainage plan to prevent flooding. With the presence of the JICA consultant, Basuki hopes to facilitate the development of IKN Nusantara with good quality.

Based on the directives conveyed by President Joko Widodo, there are two main targets in the development of IKN, namely quality assurance and aesthetics so that in the construction process they maintain environmental sustainability but the quality of construction remains maximal.

Furthermore, in the first phase of development, the government will focus on the construction of various buildings in the Central Government Core Area (KIPP) such as the Presidential Palace, the Vice President’s Palace, several ministerial offices, state high institutions, various plazas such as the Nationality Plaza, TNI and Polri facilities, housing and apartments. , other essential supporting facilities such as education, health, daily necessities and entertainment venues with themes that are in accordance with green and environmentally friendly conditions in Kalimantan.

This was conveyed by Bambang Susantono as the Head of the Archipelago Capital Authority (OIKN) that the intensity of development in the IKN area has also increased which is marked by land maturation, construction of logistics access roads, drinking water intakes to tree nurseries to restore the glory of Indonesia’s tropical forests.

Supporting the Governance of Subsidized Fertilizers to be Right on Target