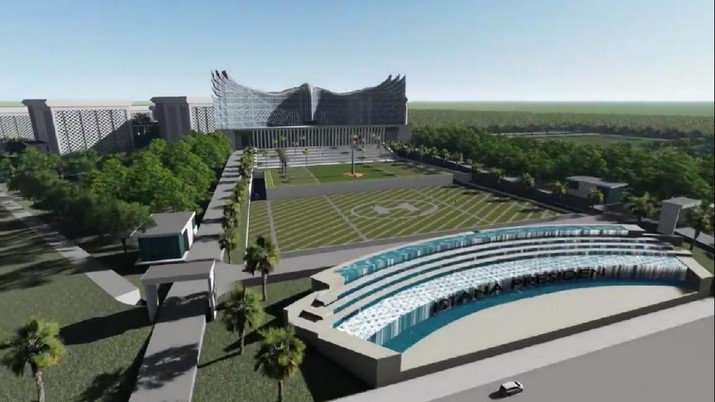 The National Capital City (IKN) nusantara will be an ultra modern and proud city, because it shows the face of Indonesia in the eyes of the international world. However, people do not need to worry about its development because 70 percent of the area is green. IKN will remain environmentally friendly because it is located in Kalimantan which is one of the world’s lungs.

The national capital will be moved from DKI Jakarta to Penajam Paser Utara, East Kalimantan. This transfer is still in progress because IKN Nusantara is still under construction. When the capital was moved, the concept changed far from metropolitan Jakarta. IKN will be a green city and very environmentally friendly.

Minister of National Development Planning Suharso Monoarfa stated that there will be development of green areas in IKN Nusantara, as much as 70-75%. There is also a modern seedling nursery area in Sepaku, East Kalimantan, amounting to 120 hectares. The capacityof the seedbed is 10 million seedlings per year.

Minister Suharso’s statement was made when he had a conference with the Regent of Penajam Paser Utara, Abdul Gafur Mas’ud. There will be no concern that the construction of IKN is contrary to Borneo’s status as one of the lungs of the world. Suharso guarantees that IKN will not drastically transform Penajam Paser Utara into an arid area, after the development process.

If there is a guarantee from Minister Suharso, then not only the Regent of Penajam Paser Utara is relieved, but also the people of Borneo, especially East Kalimantan. So far, they are afraid that the arrival of trucks and tractors will clear the forests of Borneo. But it will not happen, because the government has planned that at least 70% of the IKN area is a green area.

To realize 70% of green areas, the method is by reforestation aka reforestation in East Kalimantan. Reforestation is carried out not only in landn, but also hills. With reforestation, it is certain that Penajam Paser Utara, which later changed its name to Nusantara, will become a beautiful, cool, and pleasant area.

The government made the concept of a green city at IKN because so far, the capital city has been synonymous with places full of people and vehicles, so it is stuffy, congested, and makes it breathless. Though this situation is very unhealthy and detrimental to its population in the long run. Therefore, when the capital is moved to Kalimantan, a modern but environmentally friendly city will be made.

The concept of green city for the capital city is still rarely applied in other countries, it can even be said that Indonesia is a pioneer. Therefore, the community appreciates President Jokowi, who is working hard to realize a green IKN project that does not damage Kalimantan’s forests. A green city also has minimal exhaust emissions so the majority of the population uses electric vehicles, and this is still a long-term project.

In a sense, environmentally friendly buildings will utilize energy and efficient natural resources. The land is appropriate, there is energy efficiency, and water conservation. An example is a building that has sufficient ventilation and has RTH (green open space).

The concept of environmentally friendly buildings is very good and cannot be applied in the crowded DKI Jakarta, but it can only be applied at IKN Nusantara. In addition to the vast land, the environment is also supportive. Plants grown in RTH are also obtained from nurseries in Sepaku, so they are not too far from the current position of IKN and save on transportation costs.

When the government wants to build a forest city , it is highly appreciated by the community, because it will highlight the advantages of Kalimantan as a beautiful and still green island. IKN is located in East Kalimantan, therefore the concept follows the green of Borneo which soothes the eyes.

With the concept of a forest city , it will also dismiss the concerns of some people because they think that with the construction of the IKN, East Kalimantan will be flattened, thrown away the trees, and then built high-rise buildings on it. The government does not want it to be like that because it will create floods and negatively affect the earth, because Borneo is one of the lungs of the world.

IKN will be built with green areas and the majority of the area is still in the form of forests and green open spaces. In this way, it will not abandon the identity of the original Borneo. Then, the environment will be maintained and the house is also comfortable to live in, because it is built in an environmentally friendly manner. Natives and migrants will be comfortable to live in IKN Nusantara.