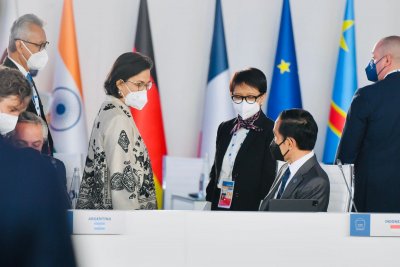 Indonesia continues to raise issues and promote the role of women in the G20 presidency. The government considers that women have an important role in the health sector, digital transformation, and changes in renewable energy which are the focus of Indonesia in its leadership in the 2022 G20.

Women become important and inspiring figures. The role of women is always needed in many sectors, momentum, to a real milestone of civilization. Although not denying the many problems that plague women, there will always be heroes named women who are able to come out and find a way.

In various perspectives, women are often seen as weak creatures. The creature tagged puts forward feelings more than logic. However, doesn’t all life also start with a woman?

These problems for women have also received a lot of attention and attention. Even in the international class, women also have a special place to always fight for, even with a focus on the G20.

Therefore, the G20 presidency is claimed to carry the promise of inclusiveness and women’s empowerment. Where they are so vulnerable and poor. Including girls who incidentally are often victims.

Retno Marsudi as Minister of Foreign Affairs also stated that women have a very important role. Namely in three priority areas where this is the focus of Indonesia for its leadership in the group of 20 Major Economies or G20 in 2022.

This statement was made by Foreign Minister Retno during the G20 Women’s Empowerment Kick-Off Meeting, which was monitored from Jakarta. He also added that the role of women in the three sectors made their empowerment even more vital. So, what are the three sectors?

The first is the Health sector, where about 70 percent of the total global health workforce are women. It is hoped that this step will contribute to a stronger, stronger and better health architecture to ensure their safety and health. In line with this, it will certainly be able to facilitate the professional growth of women.

The second is digital transformation that often exists in many countries. Women in fact play a fairly dominant role in micro, small and medium enterprises or MSMEs. In fact, in Indonesia alone, around 64 percent of business actors are women.

The provision of digital skills and knowledge will pave the way for women to be able to boost their businesses, including encouraging them to be part of the value chain and strengthening the consumer base.

Meanwhile, for the third sector, it is the focus on the agenda of the G20 presidency. , namely towards renewable energy. In this case, women are considered capable of encouraging achievements in the world’s energy transition and ensuring that the energy sector becomes more aware and sensitive to women’s rights and needs.

Foreign Minister Retno also explained that Indonesia’s various commitments to empower women to gender equality, both at the regional, national and global levels. At the national level, the government is committed to increasing the involvement of women, especially at the strategic level to the level of policy making. This includes encouraging the role of women as agents of peace, which is usually only dominated by men.

The efforts of the Indonesian state have reportedly been carried out through various programs, one of which is through the provision of training for women. Or rather one that focuses on peace and security. Especially for young diplomats, including launching a program of women peace negotiators and mediators in the Southeast Asian region. In order to increase the involvement of women in the peace process.

In this era, of course, the role of women must rise and become a top priority. Because, as we know, women’s rights must be fought for. Especially if the essence is as a mediator or peace negotiator. The country’s steps to make women the focus of the G20 must be supported and monitored as best we can.

If this focus is successful, it is not impossible that good plans for women’s welfare will be easily realized. Likewise with other focuses related to women’s problems. Wouldn’t it be, if this commitment is able to run well, women will be more advanced and able to build a better civilization. So there will be a lot of parties who will benefit.

Hopefully, the government’s efforts will get maximum results. So that all can enjoy the fruits of the hard work of various parties.