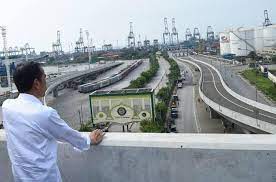 According to a number of observers, the infrastructure development that has been carried out so far during the era of President Jokowi’s leadership has turned out to be much more massive, evenly distributed and has also succeeded in bringing prosperity to the people when compared to other leaders.

The fundamental strength of the national economy cannot be separated from the massive infrastructure development that has been carried out so far, namely since about 8 years since President Jokowi has been in charge, because there has been equity in all corners of the country.

It is undeniable that the infrastructure development scheme is very different when compared to how the previous president led, which seemed to only focus on certain areas so that the name distribution of development did not reflect at all.

However, since 2014 Jokowi took the lead, village development has become one of his focuses to really improve, including how to build 3T regions (outermost, leading, underdeveloped). President Jokowi is very aware that with the vast area of ​​Indonesia, it is very important to accommodate the interests of the community other than those in urban areas so that they are able to live a much more decent life.

For information, from 2015 to 2022 alone, there have been village roads that have been successfully constructed by President Jokowi up to 316,590 km long, then there are 1,597,529 m long Village Bridges, 12,297 Village Markets and 42,357 Posyandu units. . Not only that, the problem of clean water in the village has also been handled by the success of the construction of clean water infrastructure in the village of 1,474,544 units with village irrigation of 501,054 units.

Turning to how President Jokowi’s actions in developing Indonesia, at least in the same time and less than 10 years, he has succeeded in constructing 1,762.3 KM long toll roads, constructing 30 dams and 29 airports.

Political observer who is also the Director of Indonesian Political Parameters (PPI), Adi Prayitno stated that the community also responded very well and claimed to be satisfied with how the infrastructure development performance had been successfully carried out. One of the hallmarks of the Jokowi era government is that its infrastructure development policy is very massive and it has become an open secret when compared to the SBY era, development is now very far ahead.

It is not without reason that people can feel very satisfied with how well-being is in the current era of government. The reason is that the development of this infrastructure is a very vital thing because the benefits can be directly enjoyed by the whole community and can also be seen in front of the eyes.

Adi added that all the facts and data actually showed very clearly in front of the eyes how great success was achieved by Jokowi. The era of President SBY, during his 10 years of leadership only managed to construct 189.2 km of toll roads, this figure is very far compared to the current era of President Jokowi.

The data also shows that in the SBY era in his 2 leadership periods, only 24 units of airport construction were completed. Meanwhile, in the current Jokowi era, 29 airports have been successfully inaugurated, plus there is still a target for an additional 9 airport units to be completed at least before the end of his leadership period.

If people can see with clear eyes and minds, then all the data shows this. Adi Prayitno advised the whole community not to get caught up in one-sided claims that may have been circulating on social media for some time.

Furthermore, Adi also briefly mentioned a unilateral claim regarding the issue that the upcoming 2024 presidential election seems to have been set so that only 2 candidate pairs will be created. According to him, this is a matter for the political elite and considers how the political configuration is developing, including how the party elite can convince other parties about their axis.

Political parties are institutions that fully have their autonomy and will be very difficult to be intervened by certain parties. This can actually be seen from how recent political developments are, when there has been a porpo