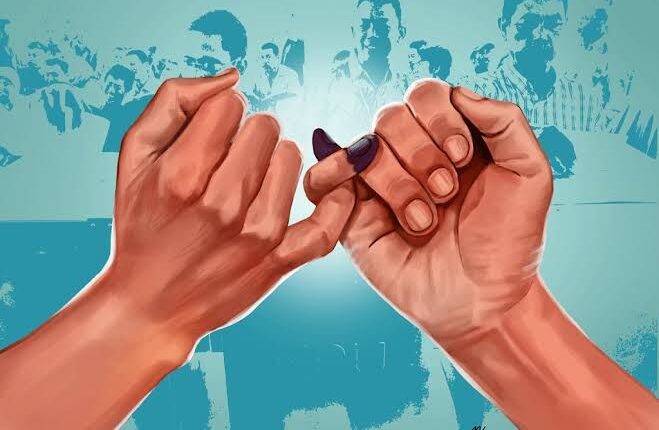 Realizing a peaceful General Election without hate speech is the desire of every community. Because the General Election is the biggest democratic party for the Indonesian people, which we should celebrate with joy. With the general election, the Indonesian people can choose a candidate for a leader who they think is appropriate to bring about change with the policies that will be born.

According to Law (UU) Number 7 of 2017 concerning General Elections, Article 1 Paragraph 1 point 1, Elections are a means of people’s sovereignty to elect members of the People’s Representative Council, members of the Regional Representatives Council, President, and Vice President, and to elect members of the DPR. Regional People’s Representatives are carried out directly, publicly, freely, confidentially, honestly and fairly in the Unitary State of the Republic of Indonesia based on Pancasila and the 1945 Constitution of the Republic of Indonesia. Elections are the embodiment of democracy, where sovereignty is in the hands of the people, and implemented in accordance with applicable laws.

Elections have six important principles in their implementation, in accordance with Article 2 of the Election Law. The six principles are direct, general, free, confidential, honest, and fair or what we usually know as overflow jurdil. These six principles ensure that every voter gets justice in choosing their leader, where all people who are eligible to become voters can freely vote directly, with confidentiality and honesty from their conscience, and receive equal treatment both in terms of rights and obligations.

An expert in Political Science at the University of Indonesia, the late Professor Arbi Sanit, previously revealed that basically elections have four functions, namely forming the legitimacy of the rulers and the government, forming political representatives of the people, circulation of the ruling elite, and political education. With these functions, he explained that the general election was aimed at enabling a safe and orderly transition of government, implementing people’s sovereignty, and implementing human rights.

Indonesia has held direct Presidential Elections (Pilpres) since 2004, with President Susilo Bambang Yudhoyono (SBY) coming out as the winner. It has been counted four times with an interval of five years, Indonesia has held the presidential election, accompanied by the implementation of the Legislative Election (Pileg) to elect members of the legislature, and the Regional Head Election (Pilkada) to elect Regional Leaders.

The year 2022, which is two years before the implementation of the 2024 General Election, seems to be the opening in the journey of the leading candidates to truly compete to become the leaders of the people’s choice. The General Elections Commission (KPU) as the state institution that organizes general elections in Indonesia has officially opened the 2024 election stages since June 14, 2022. This was conveyed by KPU chairman Hayim Asy’ari at the KPU Office in Jakarta.

The series of stages of the General Election this year starts from planning programs and budgets as well as drafting election administration regulations, updating voter data and compiling voters’ lists, registration and verification of election participants, to the determination of election participants. All of these stages will continue until 2024 until the General Election is actually held.

By 2024, the candidates will prepare themselves well to be accepted by the public’s image. The actual campaign period has not yet started, it can be started by introducing himself indirectly to the public. Introducing oneself with a good image without bringing down other parties should be the basis for the behavior of candidates or prospective candidates (balloons) participating in the General Election.

The strategy of introducing the figure of the candidate candidate balloon to the public should be carried out by respecting differences by avoiding the politicization of ethnicity, religion, race and intergroup (SARA). This is because Indonesia is a great nation with the gift of diversity from God that we must be grateful for and maintain.

Politicization on the basis of racial differences in the form of hate speech will divide the Indonesian nation. Society will be increasingly polarized, where society will become divided into two opposing poles over an issue, policy, or ideology. If this negative thing continues, there will be a sense of mutual distrust among family, friends, colleagues, or the community, and will lead to divisions and even riots.

Hate speech by continuously spreading false news should breed hostility based on unwarranted suspicions. Hate speech will ultimately result in people who do not believe in the election winners and will always be suspicious and feel that the results of the policies of the elected government are inappropriate policies and are not pro to the people.

Public distrust of the government

The Young Generation Must Resist Radicalism